Police identified the victim of the July 3 housewarming-party shooting as Julianna Carr; the gunman was her brother, John Wright

A Texas man shot his sister to death and injured three others before turning his gun on himself at what authorities said appeared to be a housewarming party on Wednesday night.

Julianna Carr died at the scene while her brother, John Wright, died after being taken to a hospital, according to the Fort Bend County Sheriff’s office.

The new residents of the home had moved in only on Monday, and the house still was filled with boxes, according to detectives, reports the Houston Chronicle.

“We are going to try to piece this together and determine what happened,” said Fort Bend Sheriff Troy Nehls, according to Houston TV station KPRC.

The injuries to the three others involved were not life-threatening, authorities said.

Those who were shot and survived were family and friends. One was shot in the face, another in the chest, and the third in the hand, reports Houston TV station KTRK.

Another two girls were found locked in a bathroom, unharmed, the sheriff said.

A woman inside the house was able to escape by hopping a fence and calling 911.

Police did not immediately say whether Wright was a new resident of the home or visiting.

A neighbor, Smita Limaye, who lives with her husband, Parag Kanade, behind the home where the shooting occurred, said that earlier in the evening they saw several people in the backyard of the home who appeared to be having a good time.

“They were screeching and laughing away,” Limaye told KTRK. “A lot of noise.”

Later, they heard a different kind of eruption.

“I heard a noise, got up, opened the blinds,” Kanade told the outlet. “I could see yelling, could hear yelling.”

Neighbors initially believed the gunshots they overheard were fireworks.

“We are not as immune as we thought,” he said. 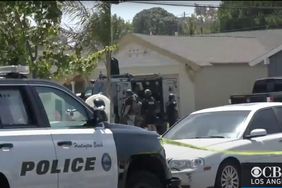 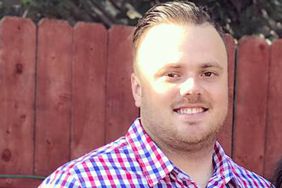 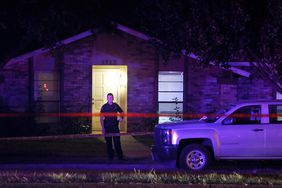