Could Joe Giudice's Conviction Prevent Him from Visiting Teresa in Prison?

It's up to the warden at the prison to decide whether Joe gets to see his wife, who is serving a 15-month sentence for fraud

When Joe Giudice didn’t visit his wife, Teresa, during her first weekend in prison last weekend, some were left wondering if he was even allowed to visit, due to his own conviction.

The answer? He most likely will be – but it’s not a guarantee.

“Visitors with criminal records are usually not allowed to visit inmates,” a source tells PEOPLE. But it’s up to the prison’s warden to decide. “The warden will probably make an exception because he’s her husband, and they are raising children together,” says the source.

That special exception, however, isn’t expected to be due to the duo’s fame.

“It happens all the time,” the source says. “A spouse who is also a convicted felon is normally cleared. He’ll most likely be allowed to visit.”

That said, other family members or friends with criminal records will not get approval, and spouses who have testified against each other can’t either, says the source.

Friends and non-immediate family must go through a more rigorous process to be approved as visitors. “Teresa has to give them a list of people she wants to come see her,” says the source. “They do a background check on them.”

While Teresa, 42, whose release date is Feb. 6, spent her first weekend alone at the women’s prison camp, Joe, 44, was seen driving daughters Gia, 13, and Milania, 8, to Gia’s cheerleading contest, before opening his New Jersey home to realtors and potential sellers, according to reports. (The massive home he and Teresa shared was listed at $3.9 million but has been reduced to $2.9 million.)

But despite the lack of visitors during her first week in prison, Teresa sent emails saying she was “doing great” and getting used to it. But she may not be sending out as many emails as she did the first week, the source notes. “There is a limit to how many emails an inmate may send per day. She had more free time to email during the first week because she hadn’t been assigned a job yet.”

Teresa was sentenced to prison on Oct. 2 after pleading guilty to bankruptcy fraud and conspiracy to commit mail and wire fraud in March. When Teresa is done serving her time, Joe will serve a 41-month sentence for the fraud charges – and a concurrent 12 months for failing to file a federal tax return in 2004. Joe, who is not a U.S. citizen, faces possible deportation when he finishes his prison term. 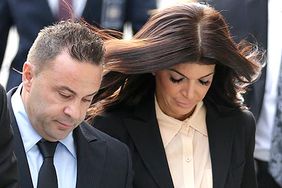