The protests, which occurred near the intersection where George Floyd was arrested, resulted in windows damaged, graffiti sprayed, and a police car vandalized

Violent protests broke out in Minneapolis on Tuesday night in response to the arrest and subsequent death of George Floyd.

According to NBC News, protestors filled the intersection where Floyd, a black male, was brutally pinned to the ground and arrested by two police officers on Monday. Floyd later died in police custody, which they characterized as a result of a "medical incident."

Protestors carried signs around the city that read "I can't breathe" — which Floyd told the officers when he was being arrested — and "Jail killer KKKops.”

“We’re here to let them know this can’t be tolerated, there will be severe consequences if they continue to kill us this will not go on another day,” one protestor told local news outlet WCCO-4.

Demonstrators and officers in riot gear faced off multiple times in tense moments. At one point, the officers fired tear gas into the crowds.

“I got on my knees and I put up a peace sign and they tear gassed me,” another protester told WCCO-4. “And I said, 'Tear gas me again because non-violence seems healing.' "

The protestors also said that true justice won't be served until the four officers involved — who have since been fired from their positions — are charged and convicted for their roles in Floyd's arrest and death.

On Tuesday, a video of Floyd being arrested by two Minneapolis police officers went viral on social media.

In the video, an officer can be seen with his knee firmly placed on the back of Floyd's neck, who was lying on his stomach, in handcuffs, next to a Minneapolis patrol car.

Three officers held Floyd down, with one placing his weight on the man's neck with his left knee, as seen in the video.

Floyd can be heard in the video groaning in pain. Throughout the nine-minute clip, he repeatedly asks for help. He tells the officers that he cannot breathe and says that "everything hurts."

Black Man Dies After Being Restrained by Minn. Officer with Knee on Neck — and FBI Will Investigate

Minneapolis police addressed the incident in a statement, claiming that it occurred Monday evening outside the Cup Foods store, and that officers "responded to the 3700 block of Chicago Avenue South on a report of a forgery in progress."

Police arrived to find "the suspect was sitting on top of a blue car and appeared to be under the influence. Two officers arrived and located the suspect, a male believed to be in his 40s, in his car. He was ordered to step from his car."

The statement continued: "After he got out, he physically resisted officers. Officers were able to get the suspect into handcuffs and noted he appeared to be suffering medical distress. Officers called for an ambulance. He was transported to Hennepin County Medical Center by ambulance where he died a short time later." 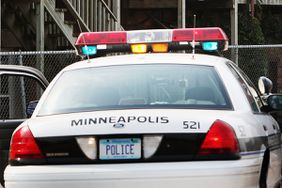 Black Man Dies After Being Restrained by Minn. Officer with Knee on Neck — and FBI Will Investigate