Tad Cummins, the former Tennessee teacher accused of kidnapping 15-year-old Elizabeth Thomas, said during his capture that he's glad the ordeal is over

After more than a month on the run, a former Tennessee teacher captured after allegedly abducting a teen student reportedly told cops that he’s relieved that the ordeal has come to an end.

Siskiyou County sheriff’s Sgt. Mike Gilley said in a press conference on Thursday that Tad Cummins, 50, said “I’m glad this is over” in a “spontaneous statement” during his arrest earlier this week.

Cummins and his 15-year-old former student Elizabeth Thomas were found in a remote cabin near Cecilville, California, on Thursday, after a tipster saw the pair and contacted the authorities, TBI spokesperson Josh Devine told PEOPLE.

“We’re absolutely thrilled and blessed to have her safe and on her way home. It’s amazing,” Elizabeth’s older sister, Kat Bozeman, told PEOPLE on Thursday. “This is the best day we could have imagined.”

Cummins allegedly kidnapped Elizabeth on March 13. The teen was last seen at a local restaurant and her family reported her missing that afternoon. An attorney for the family later told PEOPLE that Cummins allegedly “groomed” Thomas before they both vanished.

The pair was the subject of an ongoing AMBER Alert, and investigators had said they were “off the grid.”

Officials said they believe Cummins and Elizabeth had been in the cabin for about a week and a half.

The tipster, who said he had rented out the cabin to Cummins and Elizabeth, said in an interview with Today that they said they were from Colorado and that Cummis had claimed that Thomas was 24 and he was in his 30s. The tipster later saw their photos from news reports and said he realized that Cummins “was the guy.”

“We want to make sure she is getting the best care and she is in the best state possible before she gets home to Tennessee,” he said. He also said he was unaware what her reaction was when Cummins was arrested and that her recovery was a “huge success” for the state’s AMBER Alert program.

Elizabeth’ father, Anthony, told Good Morning America‘s George Stephanopoulos that the family hadn’t yet seen Elizabeth, but want her to know that they “all love her.”

Anthony said he believes that his daughter was brainwashed, and plans to take her to therapy in the future.

“Because we love her so much, we’re gonna be patient with her,” he said. “We’ve gotta get her the help she needs. Could be a short time, could be a long time. We don’t know what’s gonna be involved yet.

As for Cummins, Acting United States Attorney for the Middle District of Tennessee Jack Smith said he faces federal charges. (Cummins is currently in custody in California and it is not immediately clear if he has a lawyer who can comment on his behalf.)

Prior to his capture, a warrant had been issued for Cummins’ arrest on charges of aggravated kidnapping and sexual contact with a minor. The latter charge stems from an alleged January incident in which Cummins was allegedly caught kissing Elizabeth on school grounds.

“Elizabeth will soon be on her way home,” TBI Director Mark Gwyn said, adding, “Cummins is facing a set of charges that should be keeping him behind bars for many years.” 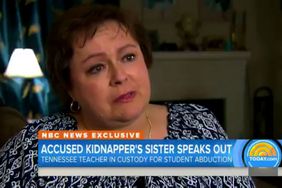 Inside the Bare, Remote Cabin Where Tad Cummins and Elizabeth Thomas Were Found