An Oklahoma woman who used Facebook to taunt the investigators looking to arrest her is now behind bars, charged as an accessory to a March murder, PEOPLE confirms.

On July 14, the Tulsa Police Department posted an image of Lorraine Graves to Facebook, adding her to their "Most Wanted" list and offering a reward for information leading to her arrest.

The post noted that investigators believed she was involved in the killing of Eric Graves, 30, who was fatally shot on March 13. According to court documents obtained by the Tulsa World, Lorraine and Eric are related, but their exact relationship was unclear.

Within two hours, Lorraine Graves, whose age was not released, commented on the post.

Other users warned Graves to stay off social media, as police would be able to track her that way.

The next day, Graves was tracked to a home in Tulsa and placed in handcuffs, according to a follow-up Facebook post from the Tulsa Police.

Two other suspects — Jayden, 19, and Gabriel Hopson, 20 — have been charged with first-degree murder for their alleged roles in the killing. Neither has entered a plea, and it was unclear if they had retained lawyers who could comment on the allegations.

The Tulsa World obtained court documents that allege a witness told detectives Jayden Hopson was upset because the woman he was courting "liked" Eric Graves.

The Hopsons pulled their guns on Graves, who began shooting at them, authorities alleged in the court documents. They say the Hopsons fired back, wounding Graves and the witness.

The court documents further allege Lorraine Graves "facilitated the discarding of the potential murder weapon" by driving Gabriel Hopson a ride to another apartment complex, where he handed off the gun to another man.

A lawyer for Graves could not be identified. She has yet to plead to the charges she faces. 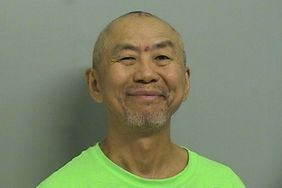