Sandy Hook Promise was created in the wake of the 2012 school shooting in Newtown, Connecticut

Back-to-school supplies take on a whole new meaning in Sandy Hook Promise’s eye-opening new PSA about the prevalence of gun violence, where students use everyday items to survive a school shooting.

At first, the video — made by the gun-violence prevention organization created in the wake of the 2012 Connecticut school shooting — seems like just another back-to-school ad.

“This year my mom got me the perfect bag for back-to-school,” a student says into the camera as he lugs his backpack out of his locker.

Within seconds it becomes clear that something else is starting to happen. With the crack of gunfire erupting behind them, students are shown running for their lives and using anything they can to protect themselves.

One teen uses her new jacket to tie a door shut. Another takes off her new sock to fashion a tourniquet around her friend’s bloody leg.

The most terrifying and gut-wrenching scene comes at the end, when a teenage girl wonders if she is going to live or die.

Entitled “Back-to-School-Essentials,” the video’s aim is to illustrate the anxiety faced by students who fear it’s only a matter of time before a school shooting will occur on their campus, says Barden.

Like the other six PSAs released since 2016 by Sandy Hook Promise and the ad agency, BBDO New York, the latest PSA unflinchingly presents the stark reality of a school shooting.

“It shows the juxtaposition of what kids should be thinking about — and what they are unfortunately being forced to think about when they go to school,” Barden tells PEOPLE.

Since the Sandy Hook shooting, Barden has dedicated his life to making sure no other family has to endure the pain of losing a loved one to gun violence.

Shortly after the shooting, Barden joined forces with Nicole Hockley, whose 6-year-old son, Dylan, was killed at Sandy Hook, and others in the community to create SHP to help stop gun violence, advocating for preventative solutions.

These include SHP’s Know the Signs programs. Highlighted in the PSAs, the programs teach students and adults how to recognize the warning signs and threats that often come before an act of violence or self-harm so they can intervene.

“We can change this,” Barden says. “This is preventable. We have developed tools that actually work. We don’t want kids to have to be looking over their shoulder in their own schools.”

He adds, “We’re on a mission to change that and we need everybody’s help. This is a call to action.”

His 17-year-old daughter, Natalie, has been helping him raise awareness about SHP’s mission — as well as working with the Junior Newtown Action Alliance, a youth organization advocating for positive change in the wake of the tragedy.

“We do a lot of letter writing and calling representatives,” says Natalie. “We are planning on going to D.C. for the National Vigil for Victims of Gun Violence [in December.]”

Natalie has also been writing about gun violence prevention, with one of her essays featured in Teen Vogue.

Previous PSA Was Nominated for Emmy

SHP’s first PSA, ‘Evan,’ had more than 11 million views on YouTube. It went on to garner a slew of industry awards and was named one of Adweek’s best ads of 2016.

Now, SHP has learned that last year’s PSA, Point of View, was nominated for an Emmy Award for Outstanding Commercial.

“It sounds cliche, but it really is an honor to be nominated,” says Barden. “We want as many people as possible to see the essential ‘Know the Signs’ message, to galvanize more people into action to protect our kids.”

Hockley, the managing director of SHP, agrees. “We cannot accept school shootings as the ‘new normal’ in our country,” she says in a release about the PSA. 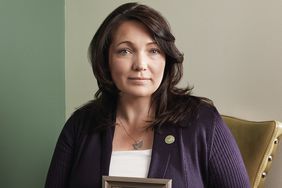