An 18-year-old former football player is accused of fatally beating an 86-year-old woman in California this week in a sexually-motivated assault after she tried to stop him from allegedly attacking her friend, authorities tell PEOPLE.

Investigators claim Fusako Petrus and her 61-year-old friend were attacked by Neven Glen Butler about 6 a.m. Wednesday as they were walking on the track at Highlands High School outside Sacramento, California.

The friend managed to escape but Petrus was killed, he says.

“There was no rhyme nor reason for this,” he says. “This was an innocent woman going about her day. This guy was just very brazen.”

Butler, the alleged assailant, is a Twin Rivers Unified School District dropout who last attended classes at Highlands High in December, a district spokesperson tells PEOPLE. He was a member of the varsity football team from 2015 to 2016.

He is being held without bail in the Sacramento County Jail after being booked Friday on a murder charge and two counts of assault with attempt to commit rape.

He was already in custody for an unrelated but similar assault on Wednesday of a 92-year-old woman at a local elderly care home, authorities say.

He was arraigned Friday afternoon on those charges. He is scheduled to be arraigned in Petrus’ death and her friend’s assault on Monday, when he will also be formally charged in that case.

It was unclear if he has entered a plea or retained an attorney.

Attacked While Helping Another

Butler allegedly attacked the 61-year-old victim first, authorities say, and Petrus heard the commotion from a few paces ahead on the track and intervened.

Turnbull says that Petrus was wielding a stick but “unfortunately it wasn’t a big walking stick. It was smaller. I don’t know if she hit him, but she had the walking stick in her hand.”

A woman who was exercising nearby witnessed the attack and ran to her car to call 911, Turnbull says.

By the time police arrived, Petrus had died from her injuries. Her friend was treated at the scene and is expected to recover.

Turnbull says detectives zeroed in on Butler after the other assault at a care home in Sacramento on Wednesday afternoon.

“He didn’t work there. He had some family members who worked there, and he was visiting,” Turnbull explains.

“[Butler] just got up and, unprovoked, just started physically assaulting the 92-year-old female,” he alleges.

Turnbull says there were witnesses to the attack. “He wasn’t hiding it,” he says. “He just started assaulting her out of nowhere. We were called, and we get there and he is still on the scene and we take him into custody for that assault.”

Butler was arrested without incident and booked at the Sacramento County Jail on felony assault and elder abuse charges.

Turnbull says that after the afternoon assault, it wasn’t a stretch to probe possible links to the earlier attack.

“How often do you have two incidents so close together in time that are very similar?” he says. “He [Butler] also matched the physical description as well” and lived near the track.

Over the next two days, detectives were able to “connect” Butler to the Petrus murder and attack on the other victim, Turnbull says.

‘A Long Road of Grieving’

In a statement on its website, the school district said officials were “relieved and grateful that authorities have a person of interest in custody,” but “shocked” that Butler was a former student.

“Our immediate concern is with the victims and their families,” the district said. “They face a long road of grieving and will need the support of the entire community. We know you join us in keeping them in our thoughts and prayers.”

Petrus appears to have no living immediate family, and her friends could not immediately be reached by PEOPLE. A neighbor who’d known her for more than 50 years told the Sacramento Bee that she was an avid gardener who enjoyed feeding the squirrels.

“We looked out for each other,” the neighbor, Lloyd Miller, said. “She took out my trash every week for me. She was a Christian and went to church every Sunday.”

Miller said Petrus had been walking at the school track for at least 40 years. 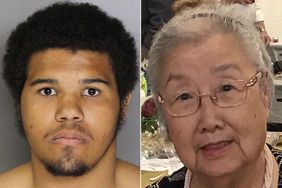