Robert Fuller was found hanging from a tree in Palmdale, California, on June 10

Robert Fuller — a Black man who was found hanging from a tree in Palmdale, California in June — died by suicide, according to the Los Angeles County Sheriff's Department.

The determination came after a "thorough," month-long investigation by the California Department of Justice and the Federal Bureau of Investigation, law officials said in a press conference on Thursday.

Fuller's body was found on June 10 at a park near City Hall. Los Angeles County Sheriff's Commander Chris Marks said there were no signs of a struggle at the scene and "no defensive wounds observed and no other signs of trauma visible to Mr. Fuller."

Marks said rope used to hang Fuller, 24, tied directly to tree branches in more than one spot, "indicating that the victim was not hoisted into that position."

The investigation further revealed an EBT card belonging to Fuller had been used to purchase a rope consistent with the one found at the scene, according to Marks.

He said investigators also found that the Las Vegas Metropolitan Police Department had previously investigated an incident in February in which Fuller "allegedly tried to light himself on fire."

Prior to his death, Fuller had been diagnosed with "having auditory hallucinations" and was hospitalized on three separate occasions since 2017 in which he told doctors he was considering suicide, according to Marks.

Fuller sought treatment for depression in November, when he “disclosed that he did have a plan to kill himself" during his hospitalization at a Nevada facility, Marks said.

Authorities initially deemed Fuller's death a suicide, but then ordered an autopsy under mounting public pressure, according to the New York Times and the Los Angeles Times.

In June, Fuller's sister, Diamond Alexander, spoke at a rally in Palmdale, saying it doesn't make sense her brother would kill himself.

"Everything that they've been telling us has not been right," she said at the time. "We've been hearing one thing. Then we hear another. And we just want to know the truth. My brother was not suicidal. He wasn't."

Fuller died 10 days after another Black man, 38-year-old Malcolm Harsch, was found dead hanging from a tree near the library in Victorville, California.

Harsch's family told CNN last month that police found new video evidence and they believed no foul play was involved in his death. 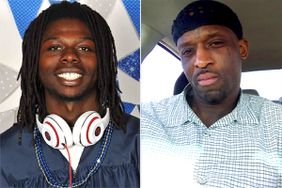 Police Said No Foul Play in Deaths of 2 Black Men Hanging From Trees, But Families Are Skeptical