Authorities allege the Rev. W. Thomas Faucher even expressed excitement over the idea of killing someone in his online chats

A retired Catholic priest who was caught with thousands of pornographic images and videos of children and boasted about urinating in the wine he blessed for parishioners described himself as a “sick puppy” in court on Thursday before an Idaho judge sentenced him to 25 years in prison.

PEOPLE confirms the Rev. W. Thomas Faucher, 73, pleaded guilty in September to five felony counts, and must register as a sex offender upon his release. He will serve the full 25 years, as the judge denied him the possibility of parole.

The sentencing “brings to a close one of the most difficult cases the Idaho Internet Crimes Against Children (ICAC) Unit has ever investigated,” said Attorney General Lawrence Wasden in a statement. “The nature of the evidence uncovered was extremely disturbing.”

Investigators first began looking into Faucher late last year, after receiving an anonymous online tip about two sexual images involving children that had been sent from the priest’s email account.

According to evidence presented in court Thursday, police waded through hundreds of emails and online chats Faucher had with someone named “Bruno.” In them, the priest, who retired in 2015 after serving for decades at St. Mary’s Catholic Church in Boise, was “actively seeking interests with gay men, satanic interests” and the rape and killing of minors.

More than 2,500 illegal files containing violent child pornography were recovered from Faucher’s computer, cell phone, and Dropbox account. In some videos, the child victims wept as they were abused.

The Idaho Statesmen reports police presented evidence Thursday from online interactions that showed Faucher had expressed a desire to have sex with boys, had “satanic desires,” and that “the thought of killing someone” was exciting to him.

Authorities also revealed the priest shared his fantasies with other pedophiles online. He spoke of wanting to sexually abuse altar boys and babies. In one exchange, he recalled enjoying a video of a boy being being beaten to death.

“I was one really sick puppy,” Faucher said during his sentencing, according to the Statesmen. “I screwed up big time … I feel so much remorse and anger.”

Other evidence showed Faucher also used racist language in his chats, and once bragged about urinating into the sacrificial wine. Police also recovered images of Faucher urinating on a cross and a canon law book.

Before being sentenced, Faucher argued he would be more useful as a free man.

But Judge Jason Scott said he disagreed, citing the conclusion of analysts: that Faucher would likely reoffend if freed.

“This is the crime that has the potential for both immediate and long-lasting consequences,” Scott said, according to the Statesmen. “I think there is a legitimate risk to the community.”

“I am deeply sorry that I was and have been connected to that in any way,” Faucher told the judge.

The Roman Catholic Diocese of Boise is moving to defrock Faucher, and allegedly had the man’s former residence exorcised before putting it on the market.

“The volumes of shocking information that the law enforcement investigation uncovered reveal the heinous nature of child pornography and the tragic impact upon its victims,” a statement from the diocese reads. “While we cannot begin to fathom what brought Faucher to the point that he was able to enter into this evil and dark world, we are thankful for the efforts of the law enforcement community in doing what it can to protect our children from these crimes.” 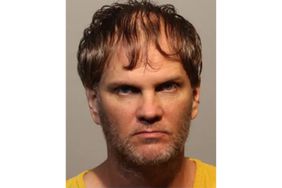