Netflix’s upcoming docuseries Wormwood mixes fiction and nonfiction to investigate a thicket of decades-long conspiracy theories around the CIA — and how one family may have paid the price for the agency’s secrets.

But to Errol Morris, its Oscar-winning director, Wormwood‘s key mystery is fairly simple.

“It’s a room,” he tells PEOPLE of the six-part series, exclusively previewed above. “When you boil it all down, there’s a room in this hotel on Seventh Avenue in New York overlooking the old Penn Station. Just after Thanksgiving 1953, Frank Olson, an Army scientist, goes out a window 13 floors onto the pavement below. What happened in that room? What in God’s name happened in that room?”

“All of Wormwood is an attempt to reconstruct that, to reconstruct the mystery of that black box, the four walls of that room and what transpired,” Morris continues. “Was Frank Olson committing suicide, was this an accident or was it something else?”

Olson’s name — and the disputed details of his death — will be familiar to longtime followers of CIA controversy: He first made national news in the ’70s, when a government report on the intelligence agency’s activities confirmed it had secretly dosed him with the drug LSD nine days before he died.

That revelation of the CIA experiment touched off his family’s quest for answers, which has dominated the life of Olson’s son Eric.

In 2012 the Olsons said they would sue the CIA, alleging their father was murdered because of what he knew about the agency and his death was covered up. (The CIA reportedly declined to comment at that time and PEOPLE could not immediately reach agency representatives for comment on Wormwood.)

Morris, the director of The Thin Blue Line, The Fog of War and other documentaries, says he found the controversy “unbelievably interesting” and an important reflection of America’s behavior toward its own citizens.

Originally interested in working on a project about MK-Ultra, a mid-century CIA program incorporating a variety of behavioral experiments (among them, brainwashing and mind control), Morris honed in on the Olsons as the gateway into a larger exploration of conspiracy and the perils of searching for the truth.

Morris explains: “The mystery of the Olson family and their relationships and the mystery of what Frank Olson was doing as a bio-weapons expert — were they using biological weapons in Korea, for example? There’s that set of mysteries.

“But as Eric Olson says very near the end of the [series], there’s a deep question in all of this: Can democracy survive if the government is engaged in a policy of lying to its own people?”

Morris: ‘I Believe I Know What Happened’

Morris often describes Wormwood as an “everything bagel,” and the series distinguishes itself not just because of its subject matter but because of how it is presented: It mixes standard interviews with real-life subjects alongside archival footage, unearthed documents and scripted scenes that may or not may depict the reality of Frank Olson’s final days.

For these sequences, which were drawn from a set of “supposed accounts” offered by the government about what happened, Morris cast actors such as Bob Balaban, Molly Parker and Peter Sarsgaard.

Sarsgaard, who plays Frank, tells PEOPLE he was first approached by Morris while performing as Hamlet in 2015. The director met him backstage with an unusual compliment: “He told me he really liked me when I was not talking.”

That sense of reserve became key to playing Wormwood‘s dramatized version of Frank Olson, a man for whom it seems the world has cracked open, revealing an abyss.

“It was way different than anything I’ve ever done,” Sarsgaard says, noting, “The character is in a whole other realm of reality.”

Referring to Frank, Sarsgaard says, “What about the people that have a conscience, that feel they can’t say anything — that have been so indoctrinated to think they would be a security risk if they did say something?”

Morris compares Wormwood‘s occasionally disorienting approach to the act of detective work itself: the piecing together of information, trying to make a whole.

“I believe I know what happened,” Morris says. “Do I know why it happened? I’m not sure.”

Though Sarsgaard, too, says he doesn’t believe the series brings helpful finality to Eric Olson, he hopes “people really focus on him” as the heart of Wormwood.

Morris, who teases the possibility of a sequel, says Eric has seen the episodes and while they “don’t agree on everything,” they “do agree on one important thing.”

“It’s important to bring this even further along to a conclusion,” he says. “I haven’t given up on it.”

Wormwood premieres on Netflix on Dec. 15 and a continuous theatrical version will be released in select theaters the same day. 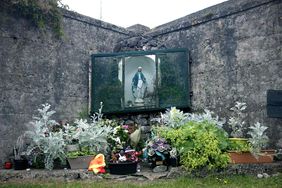 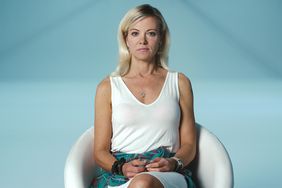