The 1995 murder of Maurizio Gucci remains one of the most shocking events in Italy's history.

On that fateful morning of March 25, the 46-year-old former heir was shot and killed while heading into his Milan office, a crime committed at the hand of a hitman hired by his ex-wife, Patrizia Reggiani.

Twenty-six years later, the stunning event is back in the headlines, as the inspiration behind director Ridley Scott's new movie House of Gucci, starring Lady Gaga and Adam Driver.

It is also the subject of a new episode of People Magazine Investigates: Killing Gucci, which features one of the last known American interviews with Reggiani, airing Friday at 10 p.m. ET on Investigation Discovery and streaming on discovery+. (An exclusive clip is shown below.)

In the special, those closest to the Gucci family and the case reveal shocking stories behind the scenes of the crime and what led to the arrests of Reggiani and her four accomplices.

Reggiani, now 72, claims she "does not like to remember" the events that led to the murder, which took place only a year after their bitter divorce.

"In court, I [admitted Maurizio and I] hated each other," Reggiani says. "I made a lot of threats, but I didn't give the order to kill him."

"She wasn't keeping [her hatred] a secret," says Nocerino, the public prosecutor who led the investigation. "Everyone in her house and her friends confirmed this."

For much more on the murder of Maurizio Gucci and the new movie it inspired, pick up the latest issue of PEOPLE on newsstands Friday.

Nocerino describes her co-conspirators as looking like "the protagonists of an Italian comedy," save for hitman Benedetto Ceraulo. "They were not criminals, they were the middle men, let's not forget that."

Reggiani was found guilty of murder in 1998 after a five-month trial and spent 18 years in prison before being released in 2016. All these years later, despite her role in Maurizio's killing, she says she still feels "enormous love for" for her ex-husband.

"If I met Maurizio now I would tell him to forgive me for what happened," she says. "All the things that happened were a big misunderstanding."

People Magazine Investigates: Killing Gucci airs Friday, Nov. 19, at 10 p.m. ET on Investigation Discovery and will be available for streaming on discovery+. House of Gucci opens in theaters Nov. 24. 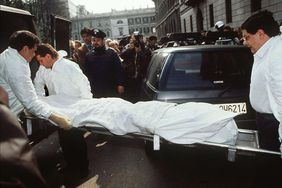