Paul Holes, who spent 24 years hunting the Golden State Killer, will do a mock crime-scene investigation at CrimeCon in New Orleans this weekend

On his last day of work before his March 2018 retirement, Contra Costa County cold case investigator Paul Holes was staking out a house.

The owner of the Citrus Heights, Calif. home, 72-year-old former police officer Joseph DeAngelo, was one of a few primary persons of interest in a series of rapes and murders by the infamous Golden State Killer, who was responsible for at least 13 attacks across California in the 1970s and ‘80s. It was one of the longest, most vicious crime sprees in U.S. history.

DeAngelo became a suspect after investigators compared the DNA markers available on the public genealogy Web site GEDMatch with their crime-scene sample. They found a pool of people possibly linked to the killer.

As he sat outside DeAngelo’s house, Holes, who had been hunting the Golden State Killer for 24 years, thought about how he’d “been burned so many times before, thinking I had found the right guy, only to have DNA prove me wrong,” he tells PEOPLE.

He had planned to approach DeAngelo for a DNA sample to rule him out and move on — but ultimately he changed his mind.

“I drove home and the next day I turned my badge and gun in,” he says.

A few weeks later, Holes and his wife were shopping for a house in Colorado Springs when he got the call he had been waiting for: Investigators had surreptitiously collected DeAngelo’s DNA, and his sample was a match to the Golden State Killer.

A Class Ring, Fine China and Silverware: Evidence in the Hunt for the Golden State Killer

DeAngelo was charged with multiple murders in April 2018 and is currently awaiting trial.

Despite being officially retired from his former career, Holes is now busier than ever — and his desire to solve crimes hasn’t stopped.

He recently teamed up with investigative journalist Billy Jensen for a new podcast called “The Murder Squad,” and was involved as an expert in Oxygen’s four-part series about the mysterious death of Rebecca Zahau.

From June 7-9, Holes is appearing at CrimeCon 2019, an annual true crime festival at New Orleans’ Hilton Riverside, to promote his latest project with Oxygen, The DNA of Murder, in which Holes travels around the country helping law enforcement agencies solve cold cases.

“We work with the agencies so we don’t hurt the case … but I’m literally trying to help these agencies solve them,” he says.

Holes will participate in a CrimeCon panel on Saturday, available to watch via livestream, involving a mock crime scene.

“I kind of arrange the crime scene to fit a scenario,” he says. “I’m going to walk the audience through how I approach interpreting a crime scene and how you can get investigative information based on the interpretation of not only the physical evidence but the behavioral evidence and the victimology. So it’s really a snapshot of what I do in real life when I work a case.”

Holes says he is grateful for the work.

“After Golden State Killer and I retired, I truly felt a void in my life on that front,” he says. “This now, me going into these law enforcement agencies and sitting at a table with the active investigators and talking shop, it just gets my juices flowing again.” 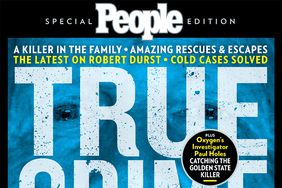