Ohio Cops Release Images of Couple Passed Out in Suspected Overdose with Boy, 4, in the Car (GRAPHIC CONTENT)

"We feel it necessary to show the other side of this horrible drug," East Liverpool, Ohio, authorities said

Ohio police have posted shocking photos of two unconscious adults – who police believe had overdosed on heroin – in a car with a 4-year-old boy in the back seat.

On its Facebook page, the city of East Liverpool, Ohio, shared the photos Thursday, along with a police report. Police say that they responded to a call of an incapacitated driver when they came across the disturbing scene.

In the post, the city explained why they took the unorthodox step of publicizing the pictures. (PEOPLE has chosen to blur the child’s face and is not linking to the Facebook page, which shows the child.)

“We feel it necessary to show the other side of this horrible drug,” the city says. “We feel we need to be a voice for the children caught up in this horrible mess. This child can’t speak for himself but we are hopeful his story can convince another user to think twice about injecting this poison while having a child in their custody.”

“We are well aware that some may be offended by these images and for that we are truly sorry,” the statement continues. “But it is time that the non drug using public sees what we are now dealing with on a daily basis.

“The poison known as heroin has taken a strong grip on many communities, not just ours. The difference is we are willing to fight this problem until it’s gone and if that means we offend a few people along the way we are prepared to deal with that.”

The city’s post has received thousands of comments, positive and negative, with users seemingly fractured about the effectiveness of such a shame-based message. Some wondered why authorities chose to include the child’s face in the post.

According to the police report, an officer saw the vehicle allegedly driving erratically and then slamming on the brakes as it approached a school bus. The officer then approached the vehicle and found James Acord in the driver’s seat.

“I noted his head bobbing back and forth,” the officer wrote. “His speech was nearly unintelligible.” The officer also noticed that his pupils were dilated.

A passed-out woman, Rhonda Pasek, was in the passenger’s seat, according to report. The officer wrote that he reached into the vehicle and removed the keys as Acord allegedly attempted to drive away after telling police he was taking Pasek to the hospital.

In their back seat was a 4-year-old boy later identified as Pasek’s grandson, authorities said, though the report erroneously said he was her son.

An ambulance arrived, and paramedics administered Narcan, a drug used to counteract a heroin overdose, according to the officer.

The officer also wrote that a piece of paper with a “pink powdery substance” was allegedly found on the passenger seat between Pasek’s legs.

Acord was charged with operating a vehicle while intoxicated, endangering children, and slowing or stopping in a roadway.

Pasek was charged with endangering children, public intoxication and not wearing a seat belt.

The boy is now in the custody of Columbiana County Children Services, according to the report.

Acord, Pasek and local authorities did not immediately return PEOPLE’s calls for comment. It was unclear Friday whether Acord or Pasek had retained attorneys or entered pleas. 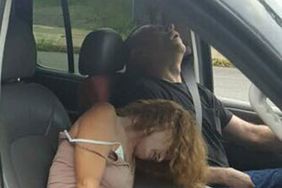