A 22-year-old New York woman who'd been traveling the country in a van with her boyfriend was reported missing on Saturday — more than two weeks after she was last heard from.

PEOPLE confirms with the Suffolk County Police Department that Gabrielle Petito last contacted her relatives on Aug. 25, when she was near Grand Teton National Park in Jackson, Wyo.

Petito and her boyfriend were crisscrossing the United States in a white 2012 Ford Transit van bearing Florida license plates.

Friends and relatives tell Newsday that Petito had been documenting her travels on YouTube.

Petito and her boyfriend started off their trip traveling from Florida to New York.

Last month, they arrived in Salt Lake City, Utah, staying only a short time, as wildfire smoke blanketed the region.

She has blonde hair and blue eyes, and several tattoos, including one on her finger and one on her forearm that reads "let it be."

Police confirm the van she was traveling in has been recovered, but have not said where.

Gabrielle's father, Joe Petito, told Newsday his daughter's disappearance feels like "drowning with your hands tied behind you."

He added: "You can't describe it. There's nothing you can do. You can't control anything."

It was unclear Monday if Petito's boyfriend has also been reported missing by his family.

Detectives are asking anyone with information about Petito's disappearance contact Crime Stoppers at 1-800-220-TIPS. All calls can remain anonymous. 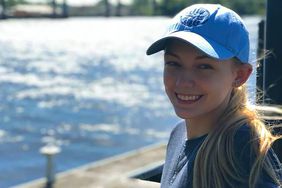