Blane and Susan Barksdale have been on the run since Aug. 26 after they allegedly overpowered security guards while being extradited from New York to Arizona

The U.S. Marshals Service has released new photos of the Arizona couple who officials are currently searching for after they allegedly escaped custody last week by overpowering security guards.

The new images were released on Saturday, showing Blane and Susan Barksdale at San Juan County Jail, where the fugitives were housed the night before their alleged escape in Utah.

“These updated photos of Blane and Susan Barksdale were taken shortly before overpowering the transport team outside of Blanding, UT,” U.S. Marshal David Gonzales said in the release. “We are asking for anyone who knows of their whereabouts or sees them to call the USMS or 9-1-1 immediately.”

Blane, 56, and Susan, 59, were being extradited from New York to Arizona when they escaped last Monday, Aug. 26, from the private security team transporting them across the country.

The couple is suspected in the murder of Frank Bligh, 72, who has not been seen since a fire consumed his Tucson home on April 16.

The wanted pair faces charges for first degree murder, first degree burglary, arson of an occupied structure, theft of means of transportation, criminal damage and prohibited possession, according to the release.

A statement from Tucson Police last week indicates the couple allegedly overpowered the two guards during a stop in Utah and fled in the security van that was transporting them.

The guards — a man and a woman — were found tied up in the back of the van, which the couple allegedly ditched in northeast Arizona. It is believed the Barksdales had at least a six-to seven-hour head start after abandoning the vehicle with the restrained guards, who eventually managed to free themselves.

A third prisoner being transported to Arizona stayed inside the van.

ABC News reports Bligh was a Vietnam veteran in the Air Force Reserve. He and Susan were old acquaintances, according to investigators.

After the killing, the couple allegedly fled to upstate New York, where U.S. Marshals, with help from a SWAT team, apprehended them.

The couple, through a friend, acquired another vehicle in Arizona — a red GMC Sierra pickup truck bearing Arizona license plate 127XTY, which they were last seen in, according to the U.S. Marshals Service.

The fugitives allegedly stole $30 from the guards. Authorities believe the couple is armed and dangerous.

“Blane has numerous tattoos on his arms and hands,” the statement from the U.S. Marshals Service says.

“The Barksdales’ direction of travel is currently unknown. Investigators have information that they are possibly traveling through Arizona” in a vehicle “with damage to the front passenger side and rear bumper.”

The U.S. Marshals Service are now offering a $10,000 reward per fugitive for the capture of the couple.

Anyone with information on the Barksdales’ whereabouts is urged to call 1-877-WANTED-2 or 911 immediately. 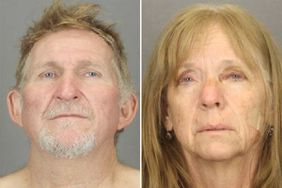