The mother of a Baltimore child whose body was found in a dumpster after she reported him missing has been charged in his death.

Alicia Lawson, 25, and her partner Shatika Lawson, 40, have been charged in the death of Alicia’s son, Malachi, after his body was found in a dumpster Saturday, Baltimore police announced at a press conference that day.

The day before, Alicia reported Malachi missing, telling police she had last seen him on his grandmother’s porch.

However, during police questioning, Alicia allegedly confessed to police that her son was not missing but deceased and led investigators to his body in a dumpster 10 miles from their home.

Charging documents released after their arrest reveal the final, painful days of Malachi’s life, according to the Baltimore Sun, WJZ and ABC News.

On July 23, Alicia and Shatika were giving Malachi a bath after he soiled himself, the women told police, according to the documents. While they washed his dirty clothes in the sink, they turned around and saw Malachi had “serious” burns on his body from his waist down.

The burns were so severe the women could see skin floating in the bathwater at the time.

But the women did not call 911, out of “fear that the child would be taken from them, that they would get in trouble for what happened to the child and their past history with child protective services,” the charging documents state.

Instead, over the next nine days, they treated Malachi at home on their own.

She then allegedly placed her son’s body in a black trash bag inside the dumpster and tied it shut.

Malachi would not be reported missing until the following day.

“From the time of the child’s injury to the fabricated call to 911, neither Alicia or Shatika sought medical treatment for the child, instead seeking to hide his injuries for the sake of their own well being which resulted in his death,” the charging documents state.

The women’s public defender could not be reached for comment Thursday. Both women remain behind bars without bond. 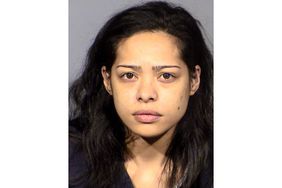