The suspect attended the same school alongside Tristyn Bailey, according to authorities

The search for Tristyn Bailey — a 13-year-old cheerleader who went missing in St. Johns County, Florida, this weekend — has come to a tragic end after her body was found less than a day after her reported disappearance.

Tristyn, who was last seen shortly after midnight on Sunday in her Durbin Crossing neighborhood, was found dead in a remote, wooded area around 6 p.m. by a local resident after authorities had put out a missing person alert, according to St. Johns County Sheriff's Office.

A 14-year-old boy has been arrested in connection to Tristyn's death, Sheriff Robert Hardwick announced in a press conference on Monday.

"We have a suspect arrested and, unfortunately, a 13-year-old girl dead," he said.

The suspect — whom PEOPLE is not identifying because he is a minor who was not charged as an adult — attended Patriot Oaks Academy alongside Tristyn, though their relationship is unclear at this time, according to Hardwick.

He is currently being held on one count of second-degree murder by the Department of Juvenile Justice, Hardwick said.

"That's actually a decision we made collectively ... with the State Attorney's Office," Hardwick told reporters. "We can always increase the charge."

A spokesperson for the 7th Circuit State Attorney's Office tells PEOPLE that officials working on determining if the suspect will be charged as an adult.

In the press conference, Hardwick noted that an investigation is ongoing as there are "multiple crime scenes."

A cause of death has not been released, pending a review by the medical examiner.

"This is not an easy process," Hardwick said. "We have a person charged with a serious crime. We have a family grieving the loss of a loved one — a child."

According to the St. Johns County Sheriff's Office, Tristyn was last seen around 1:15 a.m. at the Durbin Amenity Center wearing a white cheerleading skirt and a dark colored shirt. Hardwick said the teen was found fully clothed.

Tristyn was a seventh-grader who was on her school's cheer squad, local news outlet WJXT-TV reported.

"She is just the most cheerful, most spirited friendliest person," her coach, Courtney Sparks, told the outlet. "[She] is down to basically do whatever really to like help unite the team. Whatever it takes for like the team to get to the next level, she's the person to like help push the team forward."

In the wake of Tristyn's death, a GoFundMe campaign has been set up in support of her family. As of Monday night, it has raised more than $4,000 toward its $20,000 goal. 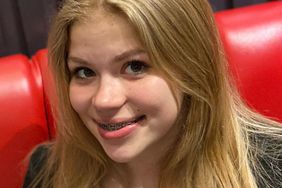