Minn. Man Is Charged with Killing His Wife, 11 Years After Her 'Accidental' Death

A Minnesota man has been charged with his wife's murder — 11 years after he claimed he shot her accidentally during a life-or-death struggle with an intruder.

Nicholas Firkus was taken into custody by a St. Paul Police Department SWAT team early Wednesday morning, authorities announced at a press conference Thursday. He has been charged with second degree intentional murder.

"Today we're one step closer to getting justice for Heidi and the truth," St. Paul Police Chief Todd Axtella said at the press conference. "It's been 4,043 days since Heidi was shot and killed in her own home. More than 11 years. And I can say with absolute certainty that someone at the SPPD thought about this case every day."

Heidi was fatally shot inside her home early in April 2010. At the time, Nicholas told police he had accidentally fired his shotgun while struggling with a home intruder. However, authorities believe the 25-year-old's death was no accident.

At around 6:30 a.m. on April 25, 2010, authorities received two 911 calls made from inside the couple's home reporting an intruder. The first call was made by Heidi and lasted 38 seconds before a gunshot could be heard and the phone disconnects. The second was made a minute later by Nicholas and includes the sound of police arriving on the scene.

Heidi was found with a gunshot to her back while Nicholas was found suffering from a gunshot wound to his leg. Authorities revealed on Thursday that there were no background sounds indicating a possible intruder or struggle on the call Heidi made and that police found nothing had been taken from the home.

During an interview with police, Nicholas said that the couple's home had foreclosed but they had not told family or friends yet and planned to tell them that day.

However, during their investigation, authorities learned that Nicholas had hid from his wife that their home had been foreclosed for 10 months and that they were going to be evicted on April 26, 2010.

"Despite having to be out of the house on Monday, April 26, there is no sign that there had been any packing done and there is no evidence of any housing arrangements where they were going to stay," Assistant Ramsey County Attorney Elizabeth Lamin said.

Before she died, Heidi had made plans with friends for the weekend. When she shared her Friday night plans with her husband, Nicholas replied via email, "I'm okay with that, as long as I can have you to myself tomorrow [Saturday] night."

"And then, on Sunday morning, at 6:32 a.m., Heidi Firkus is dead," Lamin said. "Dead from a single gunshot wound from the shotgun fired by Nicholas Firkus."

"We're extremely grateful for all those who have worked so hard and long to get the case to this point. And also for everyone who has prayed and stood beside us all these years," the statement read. "We are hopeful that these charges will finally bring out the truth and result in justice for Heidi. Even though we know we can't have her back, we believe Heidi would want us to have the truth. God is honored by truth. Heidi's life and memory is further honored by truth."

According to the St. Paul Pioneer Press, Heidi and Nicholas met at a Roseville church, where they served as youth group leaders and married in 2005.

Attorney information for Nicholas was not immediately available. He has not yet entered a plea. 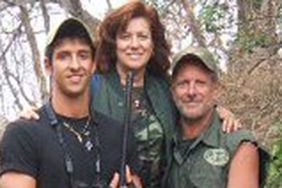