Seven years after his death, Michael Jackson is in the news again, this time over reports that claim he kept a stockpile of pornography at his Neverland Ranch.

On Tuesday, Radar Online released documents, including photographs that were purportedly from the Santa Barbara County Sheriff’s Office’s investigation of the pop star back in 2005. The items detailed in the article were described as evidence of Jackson’s penchant for adult and child pornography.

“Everything in these reports, including what the County of Santa Barbara calls ‘content that appears to be obtained off the Internet or through unknown sources’ is false,” Jackson’s estate said in a statement to the Los Angeles Times. The statement claims the new reports are “no doubt timed to the anniversary of Michael’s passing.”

Addressing this week’s reports, Kelly Hoover, a spokeswoman for the Santa Barbara Sheriff’s Office tells PEOPLE that while some of the reportedly unearthed documents appear to be valid, others do not.

“Some of the documents appear to be copies of reports that were authored by Sheriff’s Office personnel as well as evidentiary photographs taken by Sheriff’s Office personnel interspersed with content that appears to be obtained off the internet or through unknown sources. The photos that are interspersed appear to be some evidentiary photos taken by Sheriff’s investigators and others are clearly obtained from the internet.”

Hoover said that the police department did not release any of the photographs or reports to the press.

Specifically, the nude images of children he says, showed children “playing in the stream, climbing trees, nature photographs, nudist colonies, things like that,” he said. “They came from professional publications. Were they designed for pedophiles or designed as artistic photographic books I can’t comment on that.”

For more on Michael Jackson, pick up the latest issue of PEOPLE, on newsstands Friday.

Jackson died at the age of 50 in 2009 of a drug overdose of the powerful anesthetic propofol. His former cardiologist, Conrad Murray, was convicted in 2011 of causing his death.

The statement from Jackson’s estate continues: “Those who continue to shamelessly exploit Michael via sleazy internet ‘click bait’ ignore that he was acquitted by a jury in 2005 on every one of the 14 salacious charges brought against him in a failed witch hunt.”

Michael Jackson Not Guilty on All Charges 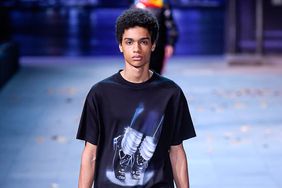