Paul McCartney and Heather Mills met face-to-face in court Monday to learn the result of their long and messy divorce.

After hours inside, Mills, 40, emerged to tell reporters, “It’s over.” She promised to reveal more details shortly, and as McCartney, 65, walked out, he said, “All will be revealed.”

McCartney arrived at Court 34 in London’s Royal Courts of Justice just after 10, humming a tune to himself. Wearing a white shirt, blue tie and his trademark black sneakers he refused to comment to waiting reporters.

His estranged wife – representing herself in court – arrived shortly after, looking stylish in a blue and tan vest, blue pants and clutching a pink Von Dutch bag.

The judge, Mr Justice Bennett, is expected to award Mills, 40, about $50M – a figure that has been widely reported – but it is unknown whether the details will be made public. That is just one of the decisions being thrashed out in Monday’s hearing.

The pair wed in June 2002 and separated in May 2006, and McCartney filed for divorce the following July.

The couple, who wed in an Irish castle, have a 4-year-old daughter, Beatrice.

Mills’s former spokesman, Phil Hall, says that for her this has not been about the money but what, she sees, as “fair entitlement” for herself and the couple’s child. “It is preposterous to think that Bea should live in a palace with one parent where she will get much attention and be surrounded by lovely toys as she would always want to be in the palace. She should live as equally as possible in both homes.” 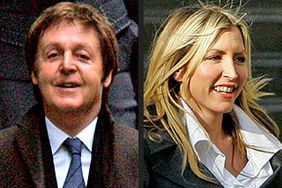