Mark Salling was seen out and about for the first time since he was released on bail after being arrested in connection with possession of child pornography.

The former Glee actor, 33, was spotted purchasing a new cellphone and leaving a T-Mobile store in Los Angeles on Wednesday.

He kept a low profile as he walked to his car, wearing a black T-shirt and athletic shorts. He also had a baseball cap and sunglasses on for the outing, carrying a pink shopping bag.

Salling was taken in custody after the LAPD’s Internet Crimes Against Children unit obtained a search warrant for his home in Sunland, California.

“This isn’t the guy I know at all,” a close friend of the star told PEOPLE of Salling. “I have to believe his computer was hacked.”

The actor posted his posted his $20,000 bail shortly before 2:30 p.m. on Tuesday, according to L.A. County Sheriff’s Department records.

While Salling has had a somewhat troubled past, a Hollywood insider told PEOPLE, “I never would have pegged him for something like this.”

The star’s rep is not commenting on his arrest. 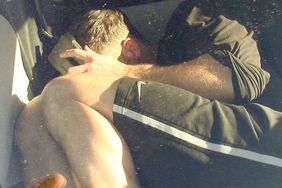