A man who claims to have had a years-long romantic relationship with Aaron Hernandez is speaking out — and saying that they had to keep their relationship hidden from everyone they knew.

Netflix is investigating the life of the former Patriots tight end in Aaron Hernandez, the Killer Inside, a three-part documentary released Wednesday. In the first episode, high school classmate Dennis SanSoucie claims that he and Hernandez were in “an on and off-relationship from seventh grade to junior year of high school.”

SanSoucie was the quarterback of the Bristol Central High School football team in Connecticut. Hernandez was a tight end. During their relationship, SanSoucie says, they experimented sexually — but didn’t tell a soul. “We had to hide what we were.”

SanSoucie says that both of their fathers were “homophobic,” and they were worried about being caught. “After doing it, it was like, “F—, did someone catch us? Did someone know? Dude, if we get caught, it’s ruined. Our parents are going to disown us.'”

His sexuality was just one of Hernandez’ struggles.

As a young star in the NFL, Hernandez’ violent streak cost him everything as he became entangled in multiple criminal cases. In 2017, he died by suicide when he hanged himself with a bed sheet in prison. He was 27.

Hernandez’ death came just five days after he was acquitted of double murder charges in the deaths of two men outside a Boston nightclub in 2012. Found not guilty in one case, he was already serving a life sentence for masterminding the 2013 murder of Odin Lloyd, his fiancée’s sister’s boyfriend. He was not eligible for parole.

“Everything about Aaron was a struggle,” a college teammate says. “He had these really angry outbursts a lot, over insignificant things. And when he started, he couldn’t stop.”

“He wanted to be the big man on campus who was having sex with a lot of women, but then he’d find guys on the down low,” the teammate says. “The girls were public, the guys were not.”

But attorney Jose Baez, who represented Hernandez in his 2017 double murder trial, says that viewers should view the documentary with a healthy dose of skepticism.

“I don’t give a damn about what some lame-ass documentary has to say about Aaron,” Baez wrote on Instagram. “I knew him, they did not and while he was far from perfect, they are not even close to the truth.”

Last year, Hernandez’ brother told PEOPLE that his brother lived a complex life, and that he was frequently misunderstood. “He had a lot of things happen, both good and bad,” Jonathan Hernandez said. “People think they know about my brother, but they really don’t. They know what they saw in the news, but they don’t know all the struggles he faced.” 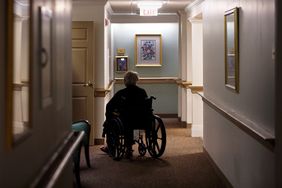