Jimenez, 20, pleaded not guilty by reason of insanity to two counts of murder on Monday, John Hall, a spokesperson for the Riverside County District Attorney's Office, confirms to PEOPLE.

A hearing has been set on October 22 for attorneys to discuss the appointment of a defense doctor to evaluate Jimenez.

Jimenez has waived his right to attend that hearing and is due back in court on January 28, 2022, according to Hall.

An attorney for Jimenez did not immediately respond to PEOPLE's request for comment.

Barajas, 19, and Goodrich, 18, were shot on July 26 as they watched The Forever Purge at the Regal Edwards Corona Crossings in Corona.

The pair had gone to the 9:35 p.m. showing of movie, which is the fifth installment of The Purge film franchise where murder and mayhem are legal for one day a year.

According to the D.A.'s office, the two were found shot in the head when theater employees went inside the auditorium to clean up after the movie ended. Goodrich was pronounced dead at the scene, while Barajas was rushed to nearby hospital and placed on life support.

Barajas, who was known as itsanthonymichael on TikTok and had close to one million followers on the social media platform, succumbed to his injuries on July 31.

Jimenez was arrested after detectives served a search warrant at his home in El Cerrito and found a firearm that matched the caliber of the weapon used in the killing, along with other "evidence related to the crime scene," the Corona Police Department previously said in a press release.

Jimenez is currently facing two murder charges with a special circumstance of lying in wait, which make him eligible for the death penalty if convicted.

Hall tells PEOPLE on Monday that District Attorney Mike Hestrin has not decided whether he will seek the death penalty. 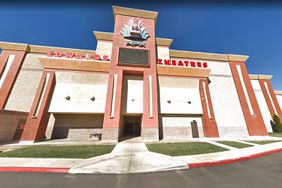 Teen Dead, Another Critically Injured After Shooting During Screening of 'The Forever Purge' at Calif. Theater