Inside the House of Horrors Mom's Past: From 'Loving' Girl to Teen Bride and Snake-Eater

Before shocking child torture allegations came to light, Elizabeth Flores had other memories of her big sister, Louise, as "loving" and "soft-spoken"

Louise Turpin’s little sister didn’t recognize the woman portrayed by authorities in January as a mom who, along with husband David Turpin, allegedly starved, tortured and held 12 of their 13 kids hostage in a California house of horrors.

Before those allegations came to light, Elizabeth Flores had other memories of Louise as a “loving, soft-spoken and sweet” sibling during their childhood years together, Flores tells PEOPLE in this week’s issue.

More significantly, Louise was the one who intentionally shielded Flores from abuse — including alleged sexual abuse at the hands of a relative — during the sisters’ turbulent years growing up in Princeton, West Virginia, Flores says.

“She was very protective of me, very motherly,” says Flores, who revisits that past — and the questions about what happened to Louise, 49, and David, 56 — in a new memoir, Sisters of Secrets, due out Tuesday.

“She was the only one that came to my rescue.”

• To learn more about Louise Turpin’s life with her sister Elizabeth Flores, subscribe now to PEOPLE or pick up this week’s issue, on newsstands Friday.

According to authorities, the Turpins’ 17-year-old daughter fled her parents and rescued herself, along with her brothers and sisters, by escaping early Jan. 14 through a window of the family’s Perris home and calling 911.

Prosecutors who charged the couple with multiple counts of torture, abuse and false imprisonment said three of the 13 children were found shackled to beds and furniture, while others were located in cramped, foul-smelling rooms.

Investigation revealed the kids were frequently left to lie in their own waste, unable to use a toilet while chained, and were allowed to shower only once a year while being denied food, even as the parents ate well, authorities have said.

As their aunt, Flores says she never saw physical abuse when she spent time with the family, although at the time of the Turpin parents’ arrest she’d been estranged from her sister for two years after a falling-out.

Flores says the unexplained oddities in the couple’s behavior began after a then-15-year-old Louise started dating David, 22, whom she met at church.

After David posed as Louise’s father and checked her out of high school in 1985, the two ran away.

They were found in Texas and returned, but they vowed to flee again until her parents gave 16-year-old Louise permission to marry David, then 23.

As the pair started their own family, Louise pulled away from her sisters and parents, Flores says.

Though she attended a Christian church in her youth, Louise was drawn to other practices after her marriage, amassing a trove of Satanic books and a Ouija board, according to Flores. Louise also began attending snake-charming festivals, telling her sister that handling and eating the reptiles gave her a feeling of power.

“People have this misconception that David and Louise were raising their kids up in this Christian home and then all of a sudden they were torturing them,” says Flores.

The couple has pleaded not guilty to the charges against them. 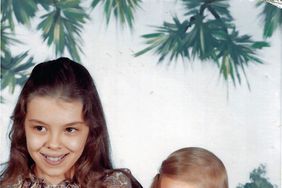 I Lived With the House of Horrors Family: What Relative Says She Saw Years Before Child Torture Case Came to Light

5 Years After Jordan Turpin Rescued Siblings from House of Horrors, a Look Back at Her PEOPLE Interview