Lori Vallow and husband Chad Daybell have been indicted on charges of conspiracy to commit murder and first-degree murder for the deaths of Vallow's two children, Joshua (J.J.) Vallow and Tylee Ryan

Lori Vallow and her husband Chad Daybell have been indicted on charges of conspiracy to commit murder and first-degree murder for the deaths of Vallow's two children, Joshua (J.J.) Vallow and Tylee Ryan, prosecutors announced on Tuesday.

Daybell has also been indicted for the murder of his wife, Tammy, as well as two counts of insurance fraud related to life insurance policies he had on her, according to a joint press release from Fremont County prosecutor Lindsey Blake and Madison County prosecutor Rob Wood.

"Fremont Prosecutor Lindsey Blake and I believe all three homicides and the related financial crimes were committed as part of a continuing criminal scheme," Wood said in a statement. "The unprecedented cooperation among law enforcement has been a model of cooperation, diligence and commitment. Every person who has worked on this case is to be commended for their diligence and steadfast pursuit of justice for Tammy, Tylee and JJ."

"Local, state and federal law enforcement professionals and local and state prosecutors have worked tirelessly for nearly a year and a half to gather the facts and evidence necessary to bring forward charges on behalf of Tylee, JJ and Tammy," said Blake. "Due to the ongoing safety restrictions imposed by the courts during the pandemic, we just recently were given permission to present information to the Grand Jury for their review. They deliberated and determined there is probable cause to believe that the Daybells willfully and knowingly conspired to commit several crimes that led to the death of three innocent people."

In addition, Vallow has been indicted on the charge of Grand Theft related to Social Security Survivor benefits over $1,000 allocated for the care of minors Tylee Ryan and JJ Vallow "that were appropriated after the children were missing and ultimately found deceased," according to prosecutors.

Attorneys for Vallow and Daybell did not immediately respond to PEOPLE's request for comment on Tuesday.

J.J. was last seen on September 23, 2019 in Rexburg, Idaho, when his mother withdrew him from school, telling the principal she planned to homeschool him. Tylee was last seen at a Sept. 8 day trip to Yellowstone National Park. After they hadn't heard from the children in months, the Woodcocks called authorities.

Vallow was arrested in Hawaii on February 20, 2020, after refusing the court order to turn over the children to police or child welfare officials.

She was charged with desertion and nonsupport of dependent children, resisting or obstructing officers, criminal solicitation to commit a crime, contempt of court and willful disobedience of court process or order — to all of which she previously pleaded not guilty.

Daybell was arrested on June 9, 2020, after the bodies of J.J. and Tylee were found on his property. 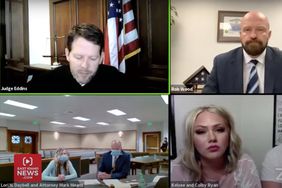 Lori Vallow Appears to Cry During Hearing on New Charges