The family of Keri Galvan, who died in the Las Vegas mass shooting, has filed a creditor's claim against the estate of shooter Stephen Paddock

The husband and three children of a victim in the October’s Las Vegas concert massacre are seeking $45 million in damages from the estate of the gunman, PEOPLE confirms.

On Wednesday, the family of 31-year-old Keri Galvan — who was killed along with 57 other innocent people in the mass shooting on Oct. 1 — filed a creditor’s claim against the estate of shooter Stephen Paddock in Clark County, Nevada, according to court documents first obtained by The Blast.

Paddock, 64, shot down onto Galvan and thousands of others at the Route 91 Harvest country music festival, opening fire from his nearby hotel suite at the Mandalay Bay casino.

In addition to killing 58 people, Paddock injured hundreds, according to police. He fatally shot himself as authorities closed in.

Documents filed in court and reviewed by PEOPLE show that Keri’s husband, Justin, and the couple’s three children, who are 10, 4 and 2 years old, are each seeking $10 million from Paddock’s estate.

The amount each family member is requesting represents Keri’s lost wages, her funeral expenses and the loss of her “love, companionship, comfort, care, assistance, protection, affection, and emotional support,” the court records show.

Justin is seeking an additional $5 million for “intentional infliction of emotional distress and assault,” the documents state.

The total size of Paddock’s estate following his death is unclear. Why authorities and his family have said he was a wealthy and successful gambler, investigators also said he lost a significant amount of money since 2015.

Paddock’s brother has been in charging of his estate and previously told the Las Vegas Review-Journalthat he was focused on getting money to the victims from Paddock’s assets.

The plaintiffs’ attorney was not available to comment to PEOPLE and efforts to reach attorneys for Paddock’s estate were unsuccessful.

Multiple lawsuits have been brought in connection with the mass shooting against the hotel owner, MGM Resorts, and the concert organizer, Live Nation.

In an earlier statement MGM said, “Out of respect for the victims, we are not going to try this case in the public domain and we will give our response through the appropriate legal channels.”

The company described the mass shooting as “a meticulously planned, evil senseless act.”

“As our company and city work through the healing process, our primary focus and concern is taking actions to support the victims and their families, our guests and employees and cooperating with law enforcement,” MGM’s statement continued. (Live Nation also said it was unable to comment on the suits.)

Keri, a resident of Thousand Oaks, California, died in Justin’s arms, according to news reports.

She attended the festival with her husband and friends, her sister wrote on a fundraising page launched to help pay for her funeral expenses.

Her children were everything to her, a close friend previously told PEOPLE: “She lived and breathed being a mother. Her family is her entire world.” 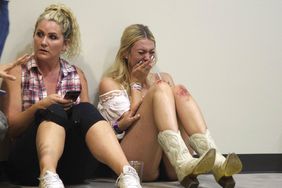