Kan. Mom with 'Big Heart' Is Murdered by Man, Who Is Later Killed by Police After Pointing Gun

Police say that Jesse Lees killed Jennifer Morris, and later was shot to death by officers

A Kansas woman was found shot to death on Wednesday, and the suspect in her murder was killed two days later after he allegedly pointed a gun at police in an alley following a chase.

Jennifer Morris, 25, was found dead inside her Topeka-area home on Wednesday.

Morris' death has devastated her family, who say that she leaves behind a 2-year-old son, Cassius.

"Jennifer, also lovingly known as Jelly Bean, was a loving daughter, sister and mother," her friends wrote in a GoFundMe to raise money for her funeral and to support her son. "She had a big heart."

Topeka police announced that the prime suspect in Morris' death was 33-year-old Jesse Lees. It's unclear whether Lees and Morris knew each other before the shooting, and police have not released a motive in the case.

Authorities tell KWCH-TV that an officer spotted Lees driving in Topeka on Friday morning. When the officer attempted to pull Lees over, he fled the scene and a chase ensued. Lees soon crashed into an SUV and fled the scene on foot.

Police say that Lees ran into a nearby alley, with three Topeka Police Department officers chasing after him. He allegedly pointed a gun at them. All three officers fired their weapons.

No officers were injured in the shooting, according to WIBW-TV.

The officers involved in the shooting have been placed on administrative leave, which is standard procedure. The Kansas Bureau of Investigation will investigate the shooting. 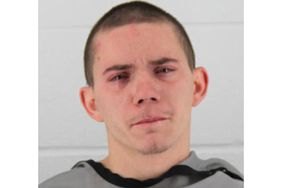