The mother of a Kansas boy whose body was found encased in concrete in his home pleaded guilty Wednesday to abusing and killing the child.

Miller and her boyfriend, Stephen Bodine, 41, tortured, abused and starved Evan for months before his death on May 19, 2017.

In September 2017, Evan’s decomposed body was found encased in concrete in the family’s Wichita home. His body was so badly decomposed that medical examiners were unable to confirm how the child died.

As part of Miller’s plea deal, she testified against Bodine, who was found guilty of first-degree murder in October, a spokesperson with the district attorney’s office tells PEOPLE. But even after the mother’s testimony, Evan’s cause of death remains a mystery.

On the night of Evan’s murder, Bodine had been punishing the boy for refusing to eat, Miller testified. He then took the screaming child into the bathroom, coming out carrying his lifeless, wet body in his arms, according to the Topeka Capital-Journal. .

Miller said that days later, Bodine told her he wanted “to take care of Evan before he started to smell.”

He then went out and bought bags of concrete and a trowel, which he used to hide Evan’s body in the home’s laundry room, according to a police affidavit obtained by PEOPLE at the time.

Four months later the landlord noticed a strange odor coming from a concrete structure. He contacted police, who discovered the remains that were later identified as Evan’s.

The couple had moved out of the home by that point.

During their investigation, authorities discovered thousands of photos and videos of Evan being tortured, the affidavit states.

In one time-stamped image from a video dated March 12, Evan is shown naked on a concrete floor. His arms and hands are behind his back and what appears to be a leather belt is around his neck, according to the affidavit.

A second video image time-stamped for the same date depicts a child’s exposed legs and buttocks, with the child standing “on a piece of cardboard atop wooden pallets on a concrete floor next to a concrete wall,” and wearing a metal chain that trails outside of the camera’s range, the affidavit states.

A voice that police attribute to Bodine is heard in the video that accompanies that image saying, “Here you go tough smart guy. Think you can hear me coming now? Think you are so smart? I betcha you can’t. I bet you you’re not.”

″[Evan] didn’t get to have the imagination like other children, where they think there’s monsters in their closets or under their beds,” Brewer said, according to the Journal. “He had real monsters.”

Miller faces a sentence of about 29 years in prison, Bennett said. The plea came after Miller testified truthfully in both Bodine’s preliminary hearing and trial.

Bodine faces life in prison and will be sentenced in December. 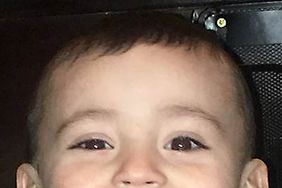 Man Gets 109 Years for 'Monstrous' Torture and Murder of Boy, 3, Found Encased in Concrete 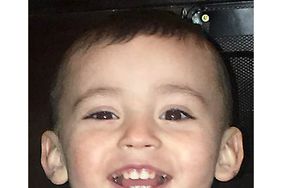 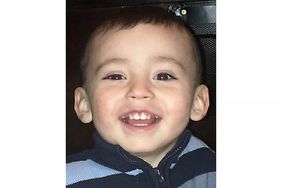 Mom Says Boyfriend Made Her Abuse Toddler Whose Body Was Found Encased in Concrete: 'Treat [Him] Like a Dog'