The actress, who did not appear in court, "has been compliant" with the terms of her probation

Lindsay Lohan is no longer wanted by police.

A Beverly Hills judge removed an arrest warrant Monday after Lohan’s attorney provided proof to the court in the judge’s chambers that the star has been faithfully attending alcohol education classes. Lohan did not appear in court.

“The warrant is quashed and set aside,” Judge Marsha Revel said. “I’ve seen additional proof … that Lohan has been compliant with [her] program. There is no indication of dirty [drug] tests.” The judge also ordered that Lohan show new proof of enrollment by April 3.

On Friday, the court had issued a $50,000 arrest warrant for the actress, which her lawyer said was “born out of a misunderstanding.”

“This was all much to do about nothing,” Lohan’s attorney Shawn Chapman Holley said following the hearing Monday. “[Lohan] has satisfied all the conditions of her probation, and I have every expectation that she’ll successfully complete those terms.”

Chapman explained that a miscommunication with the court occurred “when she had been in one program but left that program” for another due to a “personality conflict.”

“It was just a misunderstanding,” Holley added. “She’s been doing everything right.”

Following a wild night out in Hollywood on Friday, in which Lohan, 22, ended up visiting the home of actor Jack Nicholson, the actress holed up at girlfriend Samantha Ronson’s house all weekend.

On Saturday, a loud disturbance was heard at Ronson’s house, which led to a window breaking, which sources say was due to a fight between the couple. Police eventually arrived after callers complained of the crush of paparazzi that had gathered outside.

Lohan is currently serving a three-year probation term for her second DUI conviction, in August 2007. 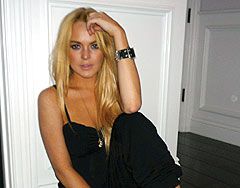 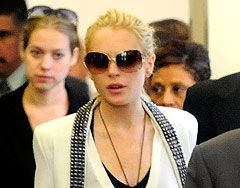 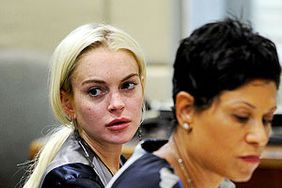