“She told the police that inmate Matt gave her pills, which he said were to incapacitate her husband and she destroyed them,” Mitchell’s lawyer Stephen Johnston tells PEOPLE.

Mitchell, 51, had planned to pick up Matt and fellow inmate David Sweat after their daring prison escape from the Clinton Correctional Facility in Dannemora, New York, on June 6, authorities said.

But on the night the convicted murderers emerged from a manhole near the prison, Mitchell failed to show up, according to investigators.

Last month, Mitchell told police that the two men had planned to kill her husband, Lyle Mitchell, after they made their way out of the maximum-security prison.

After a massive, three-week manhunt, Matt, 49, was shot and killed by police on June 26. Sweat, 35, was shot, but captured alive two days later.

During questioning, Sweat told authorities that he and Matt had planned to flee to Mexico and that it was Mitchell who came up with the idea to kill her husband, CNN reported.

An Uncertain Future for Sweat and Mitchell

At 3:05 a.m. on Sunday, Sweat was released from Albany Medical Center, where he was hospitalized for his gun wounds, and taken to the maximum security Five Points Correctional Facility in Romulus, New York, the New York State Department of Corrections and Community Supervision said in a statement.

The department would not discuss details of his transport to the prison, for security reasons, the release said.

Sweat was to remain in the prison infirmary for 24 hours to be evaluated medically, according to the department.

Following his discharge from the infirmary, Sweat will be moved to the Five Points Special Housing Unit in a single cell within the facility’s 150-bed, 23-hour confinement unit. Each cell has a bed, a writing platform, a toilet and sink, and “a facility-controlled shower which will limit movement,” the release said.

Sweat has been placed on active suicide watch, the department said.

He also faces a disciplinary hearing to determine his future, CNN reports.

Meanwhile, Mitchell remains in a jail cell in Renssalaer, New York, awaiting her next court appearance after her June 12 arrest for allegedly helping Sweat and Matt escape.

Mitchell “appears to be all right,” Johnston told PEOPLE, “but is understandably anxious about the legal process which awaits her.” 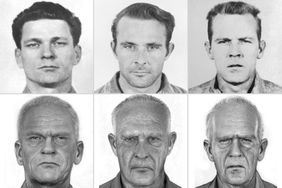