Maurice Hoskins, 43, will spend the rest of his life behind bars after pleading guilty to shooting his ex-girlfriend, Jacara Sproaps, and her friend

A 43-year-old Missouri man will spend the rest of his life in prison after admitting to fatally shooting an elementary school principal he once dated and her male friend in a fit of jealous rage in 2016.

On Monday, after reaching a plea agreement with prosecutors, Maurice D. Hoskins of St. Louis pleaded guilty to two counts of second-degree murder in the deaths of Jacara Sproaps, 38, and her friend, Maurice Partlow, 40, on July 13, 2016, the St. Louis Post-Dispatch reports.

He also pleaded guilty to five counts of armed criminal action, two counts of assaulting a law enforcement officer and one count of first-degree assault for the July 2016 shooting.

He was originally charged with two counts of first-degree murder, but those charges were reduced as part of the deal, the Post-Dispatch reports.

Instead, Hoskins was sentenced on Monday to concurrent life terms plus 20 more years in prison as part of the plea deal with prosecutors.

Hoskins had harassed Sproaps when she ended their relationship, prosecutors said, the Post-Dispatch reports.

In accepting the plea deal, Hoskins admitted to approaching Sproaps and Partlow while they were talking in the street near her home, arguing with them and then pulling out a gun.

During the ensuing struggle over the gun, Hoskins shot Partlow twice in the head.

When Sproaps and her 18-year-old son tried to run away, he shot her in the back of the head.

He shot Sproaps’ son in the back when the teen tried to pick up his mother, who had collapsed in an alley, and get her away from the scene.

She later died from the gunshots. Her son was critically wounded but survived.

Hoskins also shot two uniformed police officers who responded to the scene of the shooting, the Associated Press and local Fox affiliate KTVI report. One of them was grazed in the shin.

Sproaps started her career in education as a teachers assistant for St. Louis Public Schools in 2002, the Post-Dispatch reported.

She went on to become the principal of Dunbar Elementary School, where she had worked since 2013.

“She loved her school,” her mother, Janice Sproaps, told students and their families at a vigil for her the day after the murder, St. Louis Public Radio reported.

“She just wanted the best for all of you.”

LaKesia Richmond-Brooks, a teacher who started at the school as a teaching assistant, said Sproaps always supported her career and helped her get her certification 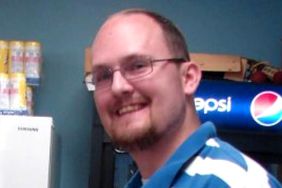