Jacob Blake Speaks from His Hospital Bed in Emotional Video: 'It Hurts to Breathe'

Jacob Blake, the Black man whose shooting by a white police officer has sparked nationwide protests, has spoken out in an emotional video from his hospital bed.

In a minute-long video shared on Saturday by Blake's attorney, Benjamin Crump, the 29-year-old described the pain he's experiencing since the Aug. 23 shooting, which left him paralyzed below the waist.

"There's a lot more life to live out here man," Blake said. "Your life, and not only just your life, your legs, something that you need to move around and move forward in life, can be taken from you like this. I promise you, the type of s--- that you will go through. I got staples in my back, staples in my damn stomach, you do not want to have to deal with this s--- man."

Blake went on to calmly explain that “every 24 hours, it's pain."

"It hurts to breathe, it hurts to sleep, it hurts to move from side to side, it hurts to eat," he said. "Please, I'm telling you, change your lives out there. We can stick together, make some money, make everything easier for our people out here, man, because there’s so much time that has been wasted.”

Jacob Blake Makes Court Appearance from His Hospital Bed, Pleads Not Guilty to Prior Charges

On Friday, Blake made his first court appearance since the shooting during a Zoom hearing from his hospital bed to plead not guilty to three prior charges.

The criminal complaint, which was filed prior to the shooting, accuses Blake of third-degree sexual assault, a felony charge, as well as criminal trespass and disorderly conduct, both misdemeanors, according to CNN and ABC News. The charges stem from an alleged assault in May.

If convicted of the felony sexual assault charge, Blake could face up to 10 years in prison and a $25,000 fine. Blake’s lawyer, Patrick Cafferty, entered not guilty pleas for all three charges.

A pretrial conference was scheduled for Oct. 21, with jury selection beginning on Nov. 9.

Jacob Blake's Dad Says He Woke Up and Asked, 'Why Did They Shoot Me So Many Times?'

On Aug. 23, a white police officer in Kenosha, Wisconsin, shot Blake multiple times after officers had responded to what they said was a domestic disturbance.

Rusten Sheskey, the Kenosha police officer who shot Blake, and two other officers at the scene, Vincent Arenas and Brittany Meronek, are on leave while the state investigates whether to file charges against them.

The altercation has fueled protests in Kenosha and elsewhere in the country, including by athletes, following earlier demonstrations after the killings of George Floyd, Breonna Taylor, Ahmaud Arbery and others. 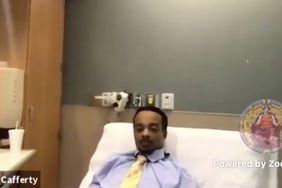 Jacob Blake Makes Court Appearance from His Hospital Bed, Pleads Not Guilty to Prior Charges