Authorities have arrested a Louisiana man who posted a video of himself licking ice cream out of a container at a local grocery store before putting it back on the shelf.

Lenise Lloyd Martin III, 36, was detained by Assumption Parish sheriffs on July 6 for his participation in the #IceCreamChallenge — the Internet’s latest viral prank that has spurred a sea of copycat crimes across the country.

The trend was first started by a teenage girl at a Walmart in East Texas, who is facing her own legal troubles with the Texas Juvenile Justice Department, according to NBC News.

Martin shared a video of himself doing the challenge on his Facebook page on July 5, licking a tub of Blue Bell ice cream at Big B’s Supermarket in Belle Rose and returning it to the store’s freezer. When a customer reported him to store employees the next day, Big B’s pulled up security footage of him in the act and called police.

Lonny Cavalier, a spokesman for the sheriff’s office, told PEOPLE that they worked with Big B’s to search for the ice cream container, but it was never found. As a precaution, they threw out all the Blue Bell ice cream in the store and notified the manufacturer.

Martin returned to Big B’s to meet police, producing a receipt allegedly proving he had purchased the ice cream.

“He said he didn’t think he was doing anything wrong. His explanation to us was, ‘All I wanted to do was be famous,’ like it wasn’t a problem,” Lonny told PEOPLE. “Obviously it’s a tremendous concern all over the country, tampering with food products. It’s a big deal.”

Martin was charged with criminal mischief for tampering with a product before he had purchased it, and unlawful posting of criminal activity for notoriety and publicity, according to online records.

He was out of prison by Tuesday, released on his own recognizance. It is not clear whether he has a defense attorney.

Tyler Cavalier — the chief of staff at the Assumption Parish District Attorney’s Office, and son of Lonny — told PEOPLE that their office has not yet received the case file for prosecutory review.

“Once we receive the file, we’re going to evaluate and look at the evidence and go from there,” he said.

“This is new for us,” Tyler added. “We never had an ice cream licker. We’ve officially seen it all.”

Meanwhile, Blue Bell has issued a statement about the challenge.

“Food safety is our top priority, and we work hard to provide a safe product and maintain the highest level of confidence from our consumers,” the company wrote on their website on July 5. “We are always looking for ways to improve, including looking at methods within our manufacturing process to add additional protection to the carton.”

“We thank everyone for their assistance in this case,” they added. 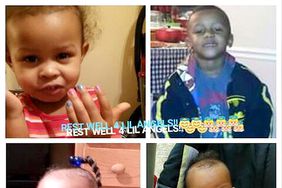 Killing Her Husband Wasn't Enough for Stella Nickell; to Make Her Point, She Poisoned a Stranger

Losing Their Shirts with Olivia

To Catch a Thief