Many people who crossed paths with David and Louise Turpin believed the couple was strange. But nobody could have predicted they were capable of the evil acts they are accused of carrying out against their 13 children.

“Never in a million years did I think [some children] were being chained to beds,” a neighbor told PEOPLE within days of the Turpins’ Jan. 15 arrests as the case quickly gained infamy. “I thought maybe they weren’t being properly taken care of but I never had anything to go off of; it was just a mom’s stomach feeling that something wasn’t right there.”

David, 56, and Louise Turpin, 49, were arrested after their 17-year-old daughter climbed out a window of their Perris, California, home and used a disconnected cell phone to call 911, alleging that she and her 12 siblings were being abused and held captive by their parents.

Each parent is being held in lieu of a $12 million bond and face numerous criminal charges in the alleged abuse of their kids, who ranged in age from 2 to 29 at the time of the parents’ arrest. The charges include torture, false imprisonment and abuse. Only the youngest child appears to have been somewhat spared from the alleged abuse, according to prosecutors.

Authorities entered their house to find an allegedly horrendous scene of malnutrition and squalor, with some of the children shackled to their beds. Prosecutors allege the Turpins denied their children food — while eating healthy amounts themselves — and only allowed them to take one shower a year. Most of the siblings were unfamiliar with how to use a toothbrush.

Both parents are scheduled to return to court for a hearing on May 4, when the parties could possibly agree on a date for the preliminary hearing for the impending trial.

As the case proceeds through the judicial system, here are four things to know about the couple.

The Turpins were married in Pearisburg, Virginia, on Feb. 11, 1985, when he was 23 and she was just 16. David and Louise reportedly grew up in nearby Princeton, West Virginia, just over the state line.

Louise’s half-brother Billy Lambert spoke with PEOPLE and said his sister met David at church. The two “ran away” to get married, Lambert explained, but they returned home to West Virginia after police caught up with them. At that point, Louise’s disapproving father reluctantly signed off on the union.

They would eventually move to Texas, where David worked as an engineer and Louise would have their first child at the age of 20. After 17 years in Texas, they moved to California, and were planning another move at the time of their arrests.

2. They Distanced Themselves From Relatives, and Renewed Vows to Each Other 3 Times

During heir marriage, the Turpins renewed their vows at least three times, according to the Las Vegas Elvis impersonator who presided over each ceremony.

As the years passed, the Turpins slowly started to distance themselves from relatives — in some cases, becoming estranged. One estranged relative, Louise’s sister, Teresa Robinette, described some of the couple’s rebellious behavior during an interview with Megyn Kelly in January.

Robinette said the Turpins felt they missed out on some of the fun their friends without kids had, so they started acting differently after having several children.

As Louise was approaching 40, the couple stopped attending church and “said they were experimenting with different religions.” They also allegedly started going out to bars when, before, they had never even taken a sip of alcohol.

“The very weird thing to me, that I would never do, is she told me her and David met a man online from Huntsville, Alabama, and that they were on their way to meet him,” Robinette said. “She was going to sleep with him, and David was okay with it. I told her I thought it was a mistake. But I know that she met this man at a motel and slept with him in Alabama.”

A year later, Robinette said the couple returned to the hotel, spending the night in the same room on the same bed.

Lambert also told PEOPLE that Louise was interested in having another child with David, noting his half-sister had “always wanted a big family.”

According to Lambert, Louise admired reality TV mom Kate Gosellin, of the Kate Plus 8 show, who was the mother of sextuplets and twin daughters.

“She had mentioned the Kate Plus 8 show, that it was a cool reality show,” Lambert recalled. “I think deep down that is what she wanted. The last conversation we had on the phone she had mentioned David is looking into a school bus because their 15 seat van is filled up.”

The Turpins have pleaded not guilty to the charges against them. They face up to life in prison if convicted on all charges.

4. Relatives Allege Louise Is In Denial Over Severity of Allegations

Elizabeth Flores, Louise’s sister, appeared on The Dr. Oz Show and described a prison visit with both parents, and said her sister appeared “almost at peace” and “in a daze,” as if “something’s not clicking right in the head … It’s all ‘woe is me.'”

Flores said she was “shocked” during the visit that Louise did not ask how her children were, and said it was almost as if Louise feels “everything’s going to be alright.” She said she thought her sister was “living a fantasy and she wants to keep it all hidden. She’s playing a game.”

David acted in a strikingly different manner than his wife. He sobbed during the encounter, Flores said.

“When I went in there, I immediately saw that he knew he had done wrong, he was remorseful, he cried the whole entire time. It wasn’t fake.”

David was like “a little boy that was ready to confess everything he had done,” Flores said.

“He kept saying, ‘I wish I could tell you about what we’ve done, what happened.’ … He had been advised not to,” she alleged. 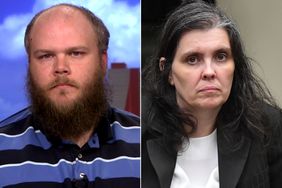 Sister of Calif. House of Horrors Mom Alleges They Were Sexually Abused as Girls 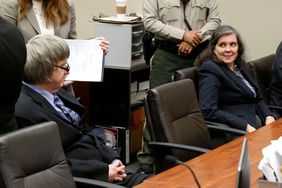