The Federal Bureau of Investigation has joined the investigation into the reported disappearance at sea of Florida real estate broker Isabella Hellmann, according to multiple reports.

The 41-year-old Delray Beach woman was reported missing on May 15. Hellmann allegedly vanished while on a boat with her husband of three months, Lewis Bennett, who says he was sleeping below deck when the vessel the couple were on hit something.

Bennett allegedly told investigators that when he emerged topside, there was no trace of his wife.

The boat was 70 miles from shore, in the Atlantic Ocean, when it allegedly started taking on water southeast of Key West. The United Stated Coast Guard suspended its search for the missing woman after three days.

U.S. Coast Guard spokeswoman Lisa Novak told the Palm Beach Post that the Coast Guard and the FBI are “jointly” working on what she characterized as “a missing person investigation.”

Novak would not comment on whether investigators suspect foul play may have been involved.

On Wednesday, Bennett told told WPTV that he was flying to Cuba to obtain a boat and conduct his own search for his wife.

He said his family was “distraught” by her disappearance and that he felt he had to do something to help find his wife.

PEOPLE was unable to reach Bennett or relatives of Hellmann for comment.

Hellmann and Bennett have a 9-month-old daughter together.

Coast Guard Miami spokesman Eric Woodall told the Post that responders inspected the boat “the best they could from the surface” and never saw what it might have struck.

He is also quoted as saying the pontoons had neither visible holes nor obvious places where water could have filled them, just deep scrapes at the back ends of each.

Woodall said that the boat had been in the Bahamas and its ultimate destination was Boca Raton. Woodall said Bennett was “bringing it over for hurricane season” but could not say from where.

Bennett told investigators Hellmann was wearing a life vest the last time he saw her, according to WPBF. 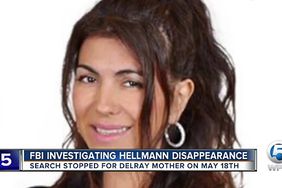 Sister of Fla. Mom Who Vanished at Sea Reveals Their Last Conversation: 'I'll See You Tomorrow'

Wife Who Vanished at Sea Was Allegedly Killed by Husband on Honeymoon Because He Wanted Her Fla. Home