Throughout the terrifying ordeal, which was captured on camera and has since gone viral, children could be heard crying and squealing.

Three adults, who were allegedly involved in the violent family brawl that took place at Disneyland’s Toontown earlier this month, are facing multiple charges after footage of the horrific incident went viral on the internet.

Avery allegedly attacked his sister, brother-in-law and girlfriend at the park, endangering his child and three other children who were at Disneyland with the family, according to the release.

He also allegedly threatened to kill members of his family after he was escorted out of the park, the Orange County District Attorney’s Office said.

In addition, he allegedly said “I’m ready to go to jail tonight” before allegedly assaulting a Disneyland employee with his car following the fight, according to the release.

His sister, Andrea Nicole Robinson, 40, has been charged with five misdemeanors, including four misdemeanor charges of battery for attacking Avery and his girlfriend and one for just attacking her brother’s girlfriend, the Orange County District Attorney’s Office said.

Andrea’s husband Daman Petrie, 44, is facing one misdemeanor count of battery. He is accused of punching Avery’s girlfriend in the face during the brawl, according to the release.

Avery pleaded not guilty to all the charges at his arraignment on Tuesday, KTLA reported. It was not immediately clear if Andrea or Petrie have entered pleas to the charges they face.

A lawyer for the family members could not immediately be found. The identity of Avery’s girlfriend has not been revealed to the public.

RELATED: Inside the New Lives of the House of Horrors Children After Years of Abuse: ‘It Made Me Strong’

Del. Woman Bludgeoned to Death in Her Sleep by Jealous Husband Angry She Had Talked to Ex

Sgt. Daron Wyatt with the Anaheim Police Department told PEOPLE authorities responded to the incident after the family had already separated and were escorted out of the park on July 6.

At the time, the family was allegedly uncooperative and refused to provide any information on what sparked the fight. Because of this, no immediate arrests were made.

Footage of the concerning incident went viral after it was shared on YouTube.

Throughout the terrifying ordeal, children could be heard crying and squealing. 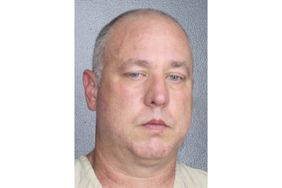