The grandmother said she knows nothing about Evelyn Mae Boswell's death

Days after Tennessee authorities found the remains of Evelyn Mae Boswell, her grandmother spoke out — and defended her daughter, the child’s mother, who has been accused of lying to police about the toddler’s whereabouts.

“She loved that baby,” Angela Boswell told the Bristol Herald Courier earlier this month about her daughter, Megan “Maggie” Boswell.

Referring to Maggie, Angela said, “That’s still my child, and I love her.”

Angela also said she had been under the impression Evelyn was in foster care when she vanished. She claimed she hadn’t seen the toddler since September, after she had a falling out with Maggie, and said she believed the child had been placed with a foster family in December — a belief that turned out to be untrue.

Timeline in Case of Evelyn Mae Boswell, Whose Body Was Found Two Months After She Was Last Seen

When the newspaper asked Angela why she didn’t ask her daughter whether the toddler had been placed with a foster family, she said she thought Maggie was embarrassed. “I just believed Maggie just didn’t want to come out and tell me,” Angela told the newspaper.

Evelyn was last seen sometime in December, according to the Tennessee Bureau of Investigation. She was officially reported missing in February, several weeks after she vanished.

Authorities first learned that the toddler was missing after hearing from an older male relative, who stated that he had not seen the toddler since the holidays.

Her remains were recovered March 6, with a positive identification being made on March 11. Investigators have not said how Evelyn died.

Maggie was arrested on February 25 and charged with one count of false reporting. Authorities allege she has told them conflicting stories about her daughter’s disappearance. She is being held on $150,000 bond and has not been charged in connection with her daughter’s death.

She has not yet entered a plea and court records do not reflect an attorney authorized to speak on her behalf.

Angela told the Herald Courier that she has no idea how the toddler died — but that she mourns the loss of her granddaughter.

“I don’t know any more than anybody else does,” Angela said. “And, you know, I’m waiting on the autopsy results like everybody else is.”

Angela, 42, also became entangled in the investigation after being arrested on charges of possession of stolen property. She and her 33-year-old boyfriend, William McCloud, were found in North Carolina in a 2007 BMW, which authorities had previously announced was a vehicle of interest in their investigation.

Both have been released on $10,000 bond, and neither has retained an attorney. Neither has entered a plea. 

In her interview, Angela said she believed the car was a gift from Maggie’s ex-boyfriend, who, she said, gave the vehicle to her because she needed reliable transportation for her two younger children. 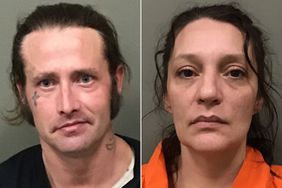