The girls were dropped off Thursday evening at a house in Richville, N.Y.

The search for two missing Amish sisters who apparently were abducted from their family’s roadside farm stand in northern New York ended with their safe return about 24 hours later when they were given a lift home. What happened in between hasn’t been revealed publicly.

The girls, 7-year-old Delila Miller and 12-year-old Fannie Miller, were dropped off Thursday evening at a house in Richville, about 15 miles from the family farm in Oswegatchie, St. Lawrence County District Attorney Mary Rain said. Cold and wet but unharmed, they knocked on the door and asked for help getting home, she said.

A neighbor who visited the Miller family after hearing word of the girls’ return said she spoke with one of their brothers, who said they were well and being checked out.

“We have the safe return of the two girls, but at the same time we have a lot of work to do,” county Sheriff Kevin Wells told WWNY-TV. “There’s still been a crime committed here, these girls were still taken away from their homes.”

No other details were immediately available about what had happened to the girls or if authorities had identified any suspects.

“We have the sheriff’s department and the FBI speaking with the young ladies,” Rain said, while noting that the Amish are a “very private people.”

She said investigators believe more than one person was responsible for the girls’ disappearance, and she was confident they would be arrested.

Word of the girls’ return came shortly after about 200 people attended a candlelight prayer vigil at Cornerstone Wesleyan Church in nearby Heuvelton. They sang “Amazing Grace” and “This Little Light of Mine,” read psalms and called children to the altar for a round of prayers.

Dot Simmons, a member of the congregation and neighbor of the Miller family, said despair turned to joy when she returned home from the vigil to word that the girls were safe.

She and her husband got a call saying that police scanner traffic was reporting the unexpected outcome and they drove next door to find an ambulance and one of the Millers’ older sons sharing the good news.

At the nearby police command post, authorities weren’t releasing any information, but the subdued atmosphere had given way to law enforcement officers exchanging smiles and high-fives.

“We are celebrating tonight, but now the real work begins,” Wells said, according to the Watertown Daily Times.

Authorities initially said the sisters vanished at about 7:30 p.m. Wednesday after a light-colored car pulled up to the farm stand and they went down to tend to the customers while the rest of their family stayed at a barn for the evening milking. By Thursday night, however, they were looking for a red car.

Searchers had scoured Oswegatchie, a farming community of about 4,000 people on the Canadian border about 150 miles north of Albany, in a hunt hampered by a lack of photos of the girls for authorities to circulate. The Amish typically shun modern technology, but the family agreed to the release of a sketch of the older child, Wells said. They had to work with an artist who spoke their language, a German dialect known as Pennsylvania Dutch.

The girls are among the youngest of Mose and Barb Miller’s 13 children, who range in age from 1 to 21 years, said Simmons, the neighbor. The girls routinely took on the chore of selling the fruits, vegetables, jams and other products of the farm, Simmons said.

“It’s absolutely amazing,” she said of their return.

St. Lawrence County is home to New York’s second-largest Amish population, which has grown in the past decade because of productive land and property prices lower than in Pennsylvania. 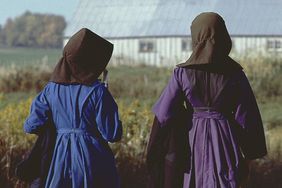