Wint was taken into custody on late Thursday evening in Washington, D.C.

On late Thursday evening, authorities finally caught up to Daron Dylon Wint, the 34-year-old man wanted for first-degree murder in connection with the quadruple homicide of businessman Savvas Savopoulos, his wife Amy, their 10-year-old son Philip and housekeeper Veralicia Figueroa.

Wint was first identified as a suspect on Wednesday night thanks to DNA left on a piece of pizza crust found inside the home after the killer (or killers) ordered food for delivery while they held the family captive.

So who is the man accused of torturing and killing three family members and their housekeeper? Authorities say the slayings weren’t random: Wint previously worked for Savopoulos’ company, American Iron Works. “We do believe there is a connection between this suspect in this case through the business,” Metropolitan Police Chief Cathy L. Lanier said Thursday.

Police haven’t revealed what the motive behind the murders might be, but it appears that the four were killed shortly after $40,000 in cash was delivered to the house in the upscale Woodley Park neighborhood. That money is now missing.

Born in Guyana, Wint immigrated to the U.S. in 2000 and enlisted in the Marines shortly afterward, attending boot camp on Parris Island, South Carolina, for two months from late July to late September in 2001.

“He never made it through boot camp,” a spokeswoman for the Marine Corps tells PEOPLE. “He would not be considered a former Marine in the sense that he did not earn his globe and anchor.

She explains: “He would be considered a Marine recruit. He was in a training capacity. He did not complete his initial training, and did not graduate.”

The spokeswoman couldn’t offer details on why Wint left the service. “Because he was in a recruit status, we do not have that information,” she says. “It could have been for a myriad of reasons.”

Wint has been arrested multiple times on charges including carrying concealed weapons, theft, harassment and violating an order of protection.

“He’s very hostile. He’s arrogant. He doesn’t listen,” one of Wint s family members, who did not want to be publicly identified, told ABC News. “You try to tell him and guide him the right way, but he thinks he knows the law.”

Records show that Wint’s own father felt so threatened by his son that he sought a protective order against him, The Washington Times reports.

“He stood in the street in front of the house and continued to threaten me and my wife,” Wint’s father wrote on his handwritten application filed in 2005. “Threats were to be on the lookout for him, I should have made the officer pat him and they would have found what he had under his clothing for me.”

The order sought to keep Wint away from his family’s home as well as his little sister’s elementary school.

“He is charming,” Ficker tells PEOPLE. “Gentle. Patriotic. He tried to join the Marines. He is not violent. He is the last person I’d ever think would be involved in this crime, or in any violent crime. I would be shocked if he had anything to do with it.”

Ficker believes that Wint was set up, claiming that police “went over a list of the employees at [Savopoulos’] company and found anyone who had criminal charges in the past.”

As for the DNA evidence found on the pizza, Ficker insists it’s not a sign of guilt. “I had a young lady come into my office with a cup of coffee, and her lipstick marks were on the cup,” he says. “Does that mean she committed a crime in my office? Of course not.

Ficker also defends Wint’s decision not to turn himself once he knew police were looking for him. “There is a lynch crew out for him,” he says. “It would not be safe for him to come forward.”

Wint showed no emotion as he was taken into custody along with three men and two women who were traveling with him, Robert Fernandez, commander of the U.S. Marshal Service’s Capital Area Regional Fugitive Task Force, told the Associated Press on Friday.

“He was stoic,” Fernandez said.

Wint had fled to his girlfriend’s house in Brooklyn, New York, on Wednesday before returning to the D.C. area on Thursday. “We believe he saw himself on the news and just took off,” Fernandez added.

Authorities caught up to him at a Howard Johnson hotel in College Park, Maryland. Wint, who was leaving the hotel as police arrived, hopped in a car and drove off with a truck following. About 20 task force vehicles and a helicopter trailed him for five miles before they finally surrounded him.

“We had overwhelming numbers and force,” Fernandez said. “They completely submitted immediately.” Fernandez also noted that he saw a pile of cash in the truck, though he didn’t know how much was there.

For their part, the Savopoulos family issued a statement thanking law enforcement for their efforts over the past week.

“We are thankful to law enforcement who have worked so diligently to bring about an arrest in this case,” they said.

“While it does not abate our pain, we hope that it begins to restore a sense of calm and security to our neighborhood and to our city. We are blessed to live in a community comprised of close circles of friends who have supported us and grieve with us.”

D.C. Mansion Murder Suspect's Father: 'We Hope Whoever Committed These Crimes Will Suffer the Consequences' 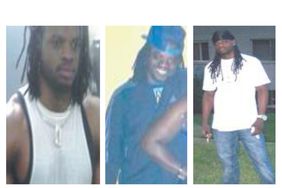 D.C. Mansion Murders: 2 Victims Were Strangled to Death, Suspect Could Not Have Acted Alone, Says Detective