Jessica Seinfeld, cookbook author and wife of comedian Jerry Seinfeld, is being sued by the author of another kitchen how-to, accusing her of copyright infringement and defamation.

“This action for copyright and trademark infringement and defamation arises from conduct that gives new meaning to the terms ‘arrogance’ and ‘greed,'” says the lawsuit, which lists what it alleges are examples of identical language in the two cookbooks. The suit also alleges Lapine alerted her publisher and Seinfeld’s to the similarities between the books before Deceptively Delicious came out in October.

The suit also addresses Jerry Seinfeld’s comments about Lapine in his defense of his wife in public appearances. On The Late Show with David Letterman in October, Seinfeld called Lapine a “wacko” who had been “waiting in the woodwork” for a chance to attack the Seinfelds.

Promoting Deceptively Delicious on The View in November, Jessica Seinfeld defended her collection of kid-friendly recipes.

“I can understand why she would have been frustrated,” she said. “It must have been hard to see how quickly my book took off. I never saw her book, I never saw her recipes, nor, as a person, would I ever do something like I was accused of doing.” 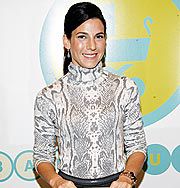 Jessica Seinfeld Cooks Up a Winner