Casey Anthony's Dad on Possibility of Another Kid: 'I Hope She Does Better This Time Around'

Casey Anthony is open to having more children — and her parents don’t believe this is a good idea.

On Thursday’s episode of Dr. Oz, George Anthony responds to PEOPLE’s recent report that his controversial daughter is “open” to having more children, according to a source close to Anthony.

“What do you think about that?” Dr. Mehmet Oz asks George Anthony. “How would you feel if you found out that she’s open to having a child?”

“When I held Caylee the very first time, I was so excited,” George Anthony responds. “I was off-the-charts excited. I was three feet off the ground for days, weeks, even some years.”

But his attitude has changed.

“Knowing now that she could potentially be a mom again, I hope she does better this time around than what she did last time,” George Anthony says.

Casey Anthony was famously acquitted of murder in 2011 in the death of her 2-year-old daughter, Caylee. She subsequently moved to South Florida, living a low-key, uneventful life in the home of one of the private investigators who worked on her case.

In a 2017 interview with the Associated Press, she said she was unlikely to have more children. “If I am blessed enough to have another child — if I’d be dumb enough to bring another kid into this world knowing that there’d be a potential that some little snot-nosed kid would then say something mean to my kid — I don’t think I could live with that,” she said.

But a year-and-a-half later, Anthony has softened her stance.

“For a long time she was like ‘no way,'” the source told PEOPLE earlier this month. “But time has changed that and she’s now open to it in a way she hasn’t been before.”

Anthony realizes that having another child would be controversial; in 2011, she was described by a Florida Department of Corrections spokeswoman as “one of the most hated women in America” — a moniker that stuck.

The 32-year-old tells friends that other peoples’ opinions don’t matter to her, says the source.

“She’s very good at living her life and to hell with what other people think,” says the source. “If she wants to have another kid, she’ll have another kid. She doesn’t care what you or I or anyone else thinks.”

Anthony works as a researcher for her private investigator. She keeps a small circle of friends, and is occasionally spotted at restaurants or clubs in Palm Beach County, Florida. She is not in contact with her family.

She continues to distance herself from her infamous past. In 2012, Anthony and her mother, Cindy, began wearing matching necklaces that contained Caylee’s ashes in small vials. PEOPLE confirmed earlier this year that Anthony no longer wears hers.

In her Associated Press interview last year, Anthony also said that she is unconcerned with public opinion.

“I don’t give a s— about what anyone thinks about me, I never will,” she told the Associated Press last year. “Based off what was in the media, I understand the reasons people feel about me. I understand why people have the opinions that they do.”

“I’m okay with myself,” she continued. “I sleep pretty good at night.”

And if Anthony becomes a mom again, what is George Anthony’s hope for his daughter and grandchild?

“If she is granted a chance to have another child, I hope that child is strong, grows up to be a worthwhile part of society and, the person that she has the child with, I hope they are going to love her and that child immensely,” he says. “I hope whatever life she has left that she makes something positive happen in her life.”

Casey Anthony's Dad Wishes He Could Be Close To Daughter, But Says 'I Can't Trust Her'

Casey Anthony 'Is Open to Having More Kids,' Says Source: 'She Doesn't Care What People Think'

Casey Anthony's Father Is 'Never Going to Be the Same' After Serious Car Crash: Source 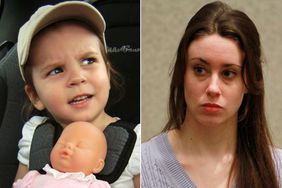