Anderson's claims that the actor grabbed her are "a blatant attempt to cash in on his celebrity," says the attorney

Charlie Sheen’s attorney has blasted adult film actress Capri Anderson’s claims against the actor as “completely false” and nothing more than a greedy cash grab.

Yale Galanter dismissed out of hand Anderson’s claim that Sheen, 45, was violent and abusive toward her on the night he was reportedly found naked and intoxicated in a trashed New York hotel suite last month.

“Ms. Capri never made any allegation to the police of any wrongful conduct on the part of Mr. Sheen on the night of the incident and she had every opportunity to do so,” Galanter said in a statement. “She also posted on her website that she was ‘fine’ and if you wanted to see more of her, for a price, one could enter the web site.”

The statement continues: “She has been to a number of law firms who have refused her case because they doubt her credibility. A number of news organizations have refused her story for the same reasons. If she pursues legal action, we will defend this vigorously. These allegations against Mr. Sheen are completely false, and are a blatant attempt to cash in on his celebrity.”

In interviews with ABC’s Good Morning America and Nightline, Anderson says she was hired to escort Sheen to dinner on the night in question. But things turned ugly, she says, when they retired to his hotel room afterward.

“I was sitting on the edge of a coffee table, and he was serving us both drinks, and he was snorting something,” she says. “There was a little bit of romance, if you will.”

But suddenly, she says, Sheen became enraged and began trashing the place. “He started throwing things. He threw a lamp. That was the first thing he picked up,” she says. “And he threw it across the room at me.” She eventually locked herself in the bathroom, but says Sheen began slamming the door and threatening to kill her.

Anderson’s lawyer told GMA that his client will be filing a report Monday with the NYPD. 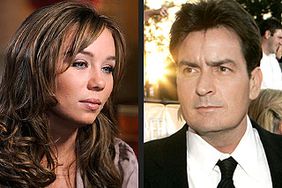 Brooke Wants to Save Marriage to Charlie Sheen, Says Lawyer