Calif. Mom Allegedly Killed Baby, Then Threw Another Child Off Balcony Before Jumping Herself

A 24-year-old California mother allegedly dropped her 18-month-old toddler off a second-story balcony, then jumped herself and landed head-first as police and neighbors watched on Tuesday.

Inside the woman’s apartment, authorities then located a nearly 7-month-old female infant who was “unresponsive and not breathing,” according to a news release from the Upland Police Department.

The infant was later declared dead from her unspecified injuries.

The mother, identified in jail records as Tierra Rose Ortega, and the toddler both were airlifted along with the infant to Loma Linda Medical Center. The toddler was diagnosed with a broken foot and is listed in stable condition.

Ortega was treated for facial injuries and released.

She was arrested and charged with suspicion of murder, attempted murder and assault of a child younger than 8 years old causing death, detective Richard Madrid tells PEOPLE.

“As far as motive and all that stuff, we don’t have one,” he says. “It’s still under investigation.”

Police had not previously been called to Ortega’s Upland apartment before they were summoned by a neighbor’s 911 call reporting a child’s screams around 11:30 a.m. Tuesday, Madrid says.

While on the line with the emergency dispatcher, the caller “saw the mother of a 1½-year-old child holding the child over a second-story landing,” according to the police statement. “The mother proceeded to release the toddler, who fell to the ground below.”

A neighbor, Yolanda Tapia, said “she was screaming, and then she threw something. I never thought it would be a baby,” reports Los Angeles TV station KNBC.

Police say Ortega’s husband was away at work at the time, according to the outlet.

Arriving officers saw the toddler on the floor, and watched Ortega herself jump from the balcony as they approached, “landing head first,” police said.

“As officers were providing the child and mother first aid, additional officers conducted a safety sweep of the mother’s apartment,” police said. “In the apartment, they located a 6-to 7-month-old female infant unresponsive and not breathing.”

After transport to the hospital, “Unfortunately, the infant female succumbed to her injuries and passed,” police said.

Ortega currently is being held without bond in the West Valley Detention Center, jail records show. Those records do not indicate if she had obtained an attorney who could speak on her behalf. 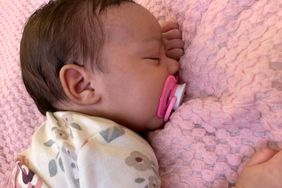