Brother of Inmate Who Attacked Former Subway Spokesman Jared Fogle in Prison: 'He Just Can't Be Around Child Molesters'

"He had to hit him," Jimmy Nigg tells PEOPLE of brother Steven Nigg's attack on Fogle

The Jan. 29 attack on Fogle took place in the recreation yard at Colorado’s Englewood Prison, according to a document supplied by the family of Steven Nigg, 60, the inmate who allegedly instigated the assault.

“He had to hit him. That’s how the whole thing started,” Jimmy Nigg, 59, who sees his brother weekly, tells PEOPLE exclusively. “He just can’t be around child molesters. He doesn’t like them.”

Fogle’s pummeling came just two months into the former sandwich pitchman’s nearly 16-year sentence for possessing child pornography and traveling across state lines to have sex with a minor.

Nigg allegedly knocked Fogle to the ground before unleashing a barrage of punches to the 38-year-old’s face, records show.

The onslaught left Fogle’s nose bleeding, his face swollen, and his neck severely scratched. His attorney, Ron Elberger, declined comment to PEOPLE. Nigg sustained a small cut on his hand and a scrape to his knee from the concrete during the attack, first reported by TMZ.

Jimmy Nigg admits to PEOPLE that his brother provoked the attack. “He can’t figure out why you would do that to kids,” Nigg says. “He says, ‘I can’t be around those people.’ ”

Steven Nigg was placed in “the hole” – solitary confinement – for 10 days and had his “good time” revoked as punishment for the beating on Fogle, his brother said. The U.S. Bureau of Prisons would not confirm the assault or punishment “based on the need to ensure safety and security in our institutions and in accordance with legal requirements including the Privacy Act,” a spokesman said.

Fogle’s attacker is in prison on weapons charges, and will be a free man in 2024 – five years before Fogle’s release.

Fogle pleaded guilty to the charges against him in November, but has since filed an appeal of the sentence.

According to the government’s pre-sentencing filing, “Fogle went to great lengths to engage in commercial sex acts with underage minors.” It adds that “he continually communicated with the prostituted minors in his attempts to find even younger children for sex. He specified the ages he wanted, including 14 and 15 year olds.”

Jared Fogle Has Gained '20 to 30 Pounds' in Prison and Pays Fellow Inmates for Protection, Says Nephew of Alleged Attacker 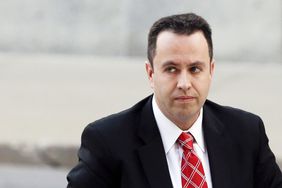