Bill Cosby's sexual assault trial began with a bang Monday afternoon as prosecutors called to the stand one of his accusers, Kelly Johnson

Bill Cosby‘s sexual assault trial began with a bang Monday afternoon as Pennsylvania prosecutors called to the stand one of only two accusers who were allowed to testify.

Kelly Johnson — previously identified only under the pseudonym “Kacey” — described over multiple hours of testimony how Cosby allegedly drugged and sexually assaulted her at a bungalow at a hotel in Los Angeles in 1996.

In response, Cosby’s defense attorney hammered at what he called discrepancies in her accusations.

Johnson, Monday’s sole witness, spent three hours on the stand. She was calm and composed as she began testifying how she first met Cosby in the early 1990s, while she was working as an assistant to his agent. Then she slowly dissolved into tears, shaking, as she alleged that Cosby assaulted her.

She said he “intimidated” her into taking a white pill to help her “relax” — and then, some time later, she woke to find herself on the bed in the bedroom of his bungalow, partially undressed, her breasts exposed.

He was standing by the side of the bed, she testified.

“I could see a bottle of lotion on the corner of the nightstand,” she said, pausing and putting a hand to her mouth as though to try and gather herself. “He put lotion in my hand … and he made me touch his penis.”

Cosby has pleaded not guilty to the charges — insisting their sexual contact was consensual — and has denied similar allegations from more than 60 women.

‘My Word Against His’

Johnson came forward with her story in January 2015. Prosecutors in Montgomery County, Pennsylvania, had sought to have 13 accusers as witnesses at trial. But Judge Steven O’Neill only allowed Johnson’s testimony, as well as Constand’s.

When defense attorney Brian McMonagle got his turn in court on Monday, he immediately attempted to undercut Johnson for what he said were differences between what she recounted in January 2015, in a press release and news conference, and what she described during a long-ago civil deposition.

After being pressed by Judge O’Neill, however, McMonagle admitted he only had lawyer’s notes of Johnson’s deposition in that case, not the document itself.

McMonagle argued in his opening statement that “sexual assault is a terrible crime.”

“The only thing worse than that is the false accusation of sexual assault,” he said.

Johnson never went to police because she was “very afraid” as Cosby was one of the “biggest celebrities in the world,” she testified.

“It was my word against his,” she said.

Johnson said she first met Cosby in 1990 while working as an assistant to his agent at what was then known as William Morris, a talent agency, and she developed a casual friendship with him in which he’d call her and chat, sometimes asking her to switch from her office phone to another one and call back.

Cosby invited her to a meal at the Bel Air Hotel one day in late 1995 or early 1996 to “discuss my life my career,” she testified.

“Those are the kinds of conversations we’d have,” she said. “He’d call and ask me about my life like in a fatherly, Dr. Huxtable kind of way” — referring to the character Cosby portrayed in his hit TV series The Cosby Show.

At the last minute, before they were to meet, Johnson said he changed the location to a private bungalow instead of the hotel dining room. When he answered the door, he was wearing a bathrobe and slippers, she said.

‘Would I Give You Anything to Hurt You?’

“I thought it was a little odd,” Johnson, who was 34 and a new mother at the time, testified. “I thought he’d get dressed then we’d go and have lunch as planned.”

Instead Cosby told her he was having lunch delivered to the bungalow, offered her wine and water and, when she refused, told her she needed to relax, she said.

Johnson started to tear up when she described what happened next.

“He had his right hand like this,” she said, demonstrating by holding her right hand palm-side up. “And there was a large white pill in the palm of his hand.”

She asked him what the pill was, but he would not tell her, she said.

“He said, ‘Would I give you anything to hurt you? Trust me. It’ll just help you relax,’ ” she testified.

Feeling pressured by him, Johnson finally agreed to take the pill, putting it under her tongue and pretending to swallow it with water, she said.

“He handed me a glass of wine and he leaned forward and said, ‘Open your mouth. Lift up your tongue,’ ” she said, her voice shaking at the memory. “And I did. And there it was.”

So she swallowed it for real then quickly excused herself to the bathroom, where the sink area was “covered with prescription pill bottles,” she said. She tried to read the bottles, hoping to figure out what he gave her, but was having trouble, even though she didn’t need glasses.

“I felt like I was under water,” she said.

Johnson testified that she went back to the living room and sat on the couch, and the next thing she remembered was waking up in the bungalow’s bedroom on the bed.

“My dress was pulled up from the bottom and it was pulled down from the top and my breasts were out and I felt naked,” she said. “But the dress wasn’t off of me.”

She does not remember how she got home that night, she said.

She never saw Cosby again, she said — but not long afterward, she overheard a conversation between Cosby and her boss.

Ultimately, Johnson testified, she went to human resources and filed a workman’s compensation claim, after which she was fired. 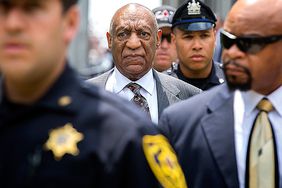