No charges were filed "due to conflicting stories, lack of cooperation by the victim and witnesses, no physical injuries," report says

Cincinnati Reds All-Star pitcher Aroldis Chapman allegedly shoved and choked his girlfriend and then went into the garage of his Davie, Florida, home alone and fired eight rounds with a handgun into a concrete wall, according to a police report obtained by PEOPLE.

The alleged incident occurred on Oct. 30 but was first reported on Monday in a Yahoo Sports report. The report states that Chapman, 27, “was involved in a physical altercation with his girlfriend… over information she obtained from his cellphone.”

According to the report, Chapman’s girlfriend told cops that he ” ‘choked’ her by placing his hands around her neck, but did not prevent her from breathing at any time.” She also allegedly told them that he pushed her up against a wall and caused her to fall to the floor.

Chapman allegedly admitted to cops that during the argument, he left the house and got into the passenger seat of his Land Rover, where he punched the side window with his left hand – his pitching hand – causing a laceration. After that, Chapman allegedly told cops, he locked himself in his garage alone and shot several rounds inside. Police recovered eight shell casings.

No arrests were made in the incident. Investigator Mark Brent wrote: “Due to conflicting stories, lack of cooperation by the victim and witnesses, no physical injuries, and the fact that Mr. Chapman fired his gun in a closed garage with no one present, there is insufficient evidence to charge him with a crime.”

Chapman’s girlfriend, who is the mother of his infant child, left the house with police still there, the report states. When Brent asked the girlfriend’s brother to pass along his telephone number, the brother allegedly told Brent that she probably wouldn’t call him, the report states.

Jay Reisinger, Chapman’s attorney, did not respond to PEOPLE’s request for comment. However, he told Yahoo Sports, “On behalf of Mr. Chapman, we vehemently deny the allegations as stated. Beyond that, we have no further comment at this time.”

Reds spokesperson Rob Butcher tells PEOPLE that the team has no comment because it’s a pending investigation. Reds President of Baseball Operations Walt Jockety told Cincinnati.com that MLB is investigation the incident, saying, “They ll look into it and everything publicly will be handled through MLB.”

Chapman, a four-time All-Star who defected from Cuba in 2009, is widely regarded as the fastest thrower in baseball. According to a 2015 report by MLB.com, Chapman threw the fastest 101 pitches in baseball through mid-August of 2014. 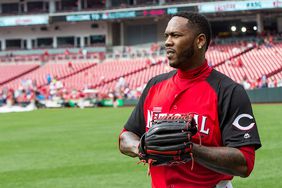