“The murders of my wife and son have caused an incredibly difficult time in my life,” Murdaugh said in a statement

Two days after prominent South Carolina attorney Alex Murdaugh was shot in the head in Hampton County, South Carolina, he has issued a statement saying that he will resign from his family's law firm and enter treatment.

"The murders of my wife and son have caused an incredibly difficult time in my life," he said in the statement, which was obtained by The Island Packet. "I have made a lot of decisions that I truly regret. I'm resigning from my law firm and entering rehab after a long battle that has been exacerbated by these murders."

Murdaugh, 53, called 911 on Saturday afternoon at 1:34 p.m. after receiving "a superficial gunshot wound to the head," the S.C. Law Enforcement Division said Sunday. He is expected to recover from his injuries.

For more on Alex Murdaugh and the murder mystery surrounding his family, and other top stories, listen below to our daily podcast PEOPLE Every Day.

"He was shot in the head while he was changing a tire," Murdaugh's attorney Jim Griffin confirmed to PEOPLE on Saturday. "He is conscious and talking, which is a very good sign."

Saturday's shooting came less than three months after his wife Margaret "Maggie" Murdaugh and son Paul Murdaugh were murdered on the grounds of the family's 1,770-acre hunting lodge.

At 10:07 p.m. on June 7, Alex Murdaugh, called 911 to say that he returned to his family's property and found his wife and son "shot outside the residence," South Carolina Law Enforcement Division spokesperson Tommy Crosby announced in a release at the time.

Authorities have also not identified a motive or a suspect in the killings of Maggie and Paul, but their deaths shone a spotlight on a string of mysterious deaths surrounding the family.

Paul Murdaugh was indicted in a 2019 boat crash that killed one of his passengers, Mallory Beach. Investigators concluded that the teens were "grossly intoxicated." He pleaded not guilty to three felony counts of boating under the influence and was awaiting trial at the time of his death.

Paul and Maggie's death also led the state's top law enforcement agency to open an investigation into the 2015 death of teenager Stephen Smith, who was found dead in the middle of a rural road in Hampton County in 2015, three miles from where his car had run out of gas. .

A statement from the South Carolina Law Enforcement Division (SLED) at the time said that the agency "has opened an investigation into the death of Stephen Smith based upon information gathered during the course of the double murder investigation of Paul and Maggie Murdaugh."

Why Were a 'Loving' Mother and Son from a S.C. Family Dynasty Murdered on Their 1,770-Acre Property?

While the case is investigated, Alex Murdaugh expresses his regrets upon entering treatment -- but he does not address the shooting.

"I am immensely sorry to everyone I've hurt, including my family, friends and colleagues," he said in the statement. "I ask for prayers as I rehabilitate myself and my relationships."

Murder, Money & Mystery: Were the Killings of a Mom and Son Connected to 3 Previous Deaths? 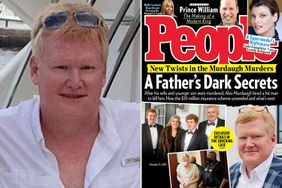