Why Miranda Lambert Is Scared of the N.Y.C. Subway — and How Her Husband Is Trying to Fix It

Miranda Lambert is still getting used to her new city life.

After her whirlwind marriage to New York Police Department officer Brendan McLoughlin nine months ago, the country music star and her husband have been splitting their time between her farm in Nashville and his home in New York City.

While Lambert has a newfound appreciation for the bustling city, she is still learning her way around the public transportation system.

She admitted McLoughlin was trying to fix her fear by getting her to “chill out about it.”

Last week, Lambert — who now has a Manhattan apartment with McLoughlin — opened up to PEOPLE about her relationship with the NYPD officer, and how he has shown her a whole new side to the city.

“I’ve been to New York so many times, but I’ve only worked,” she told PEOPLE. “I’ve never just gotten to like hang out and wander the city and really take in what that is, good and bad. There’s these crazy awesome rock bars and graffiti, I really enjoy it.”

“I love the city,” she added. “My heart is in Texas and Tennessee, but my husband has opened my eyes to a whole new world.”

That being said, Lambert still needs her time away from the hustle and bustle, visiting her farm — which she says helps “refuel” her.

Miranda Lambert on What Inspired Her New Album Wildcardand the Ink She Got to Match: ‘I’m the Queen of My Own Heart’

“It does drain your energy,” the musician said of New York City. “Spending a lot of time here, I start to get anxiety and stress, and go, ‘Okay, that’s three days. No more sirens. I’m good’… That’s why going back to the farm refuels me. When I was younger, I used to thrive on more noise and more going and more people. It’s opposite now. I need the quiet versus the noise.”

Back at her farm near Nashville, “I’ve got bunnies and horses and dogs, cats, and I just can wear no makeup and be in the same clothes for three days,” she said. “They don’t care. It’s just really a place where I can regroup.”

And McLoughlin isn’t just helping her adjust to the new city. Lambert revealed that her hubby has also encouraged her to live a more active lifestyle.

“He helps me because he’s so energetic and he’ll push me,” Lambert told PEOPLE of their joint sweat sessions.

On the other hand, she said she’s also teaching him a valuable lesson about self-awareness. “I think I’m helping him realize that, that’s great and all, but that’s not what defines you” she explained. “You’re very genetically blessed and I’m happy for you, but who you are isn’t what you look like.” 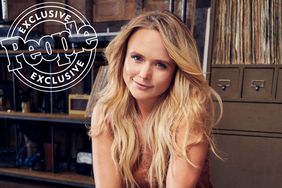