Established by Ward Guenther in 2011, artists gathered last (when else?) Monday night at the Ryman to celebrate the milestone

Making good on a four-year promise, Ryan Hurd took the stage with a smile that never left his face for his hit "To a T."

Lindsay Ell joined several of the members of her touring band, on loan to Whiskey Jam in the form of The Pitch Meeting, a recently established collective of musicians devoted to enriching the purity of music in the Nashville artist community.

Jimmie Allen has been bringing high energy to the crowds of Whiskey Jam since 2012, this night hopping off the stage and into the pews to get the crowd singing along to "Make Me Want To."

In one of the most poignant performances of the night, Craig Campbell silenced the crowd with just his guitar and a soul-baring performance of his hit song "Outskirts of Heaven."

"Jam Fam" for nearly the entire decade of Whiskey Jam's existence, Cole Swindell got the energy up early with his rousing "Ain't Worth the Whiskey."

Randy Travis, moments before the crowd erupted at his resounding "amen" to close out his iconic country song, "Forever and Ever Amen," at The Mother Church of Country Music, the historic Ryman Auditorium. 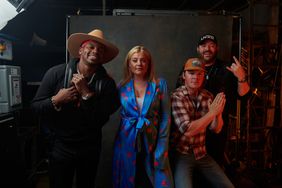 Go Inside the Whiskey Jam 10th Anniversary Portrait Booth: All the Photos