The "After a Few" singer made the most of his quarantine time with songwriting, but he does have one regret for a lost opportunity: He didn't try to grow a beard

Looking back on the long months of quarantine, Travis Denning says he does have one regret.

"I should've tried to grow a beard," says the "After a Few" singer, who can beat anyone to the punch with jokes about his pinch-worthy baby face. "I know I can't, but if there was ever a time I could dedicate to the awkward phase of patchy facial hair, it was last year. I should've taken that opportunity to see how far it could have gone. But I'm a little glad I didn't, because it might've been the ultimate confirmation that I cannot grow a beard."

Still, the 28-year-old Georgian did manage to accomplish much over the past year and a half: buying a house, getting a puppy with his girlfriend, and for fans eager for new music, completing his second EP, Dirt Road Down, available now.

No doubt channeling his energy into these efforts, rather than hirsute pursuits, has proven a lot more gratifying to Denning. But at first, he admits, he wasn't ready to make the most of his time after his touring — including supporting Sam Hunt — was canceled.

As always, Denning says, he was able to rebound by relying on his tried-and-true source of inspiration: Georgia sports. "I love the Falcons, the Braves, the Hawks — anything Georgia," he explains. "So I'm pretty used to things going really, really well. And then when it matters, they fall apart."

And then he realized, well, there's always next season. "I just went, hey, when this is over, we'll be back because that's what we do," he says. "And you just got to chalk it up as it's a big ol' door that closed, and you find a window to go around it and just enjoy."

Songwriting obviously became the lifeline that kept Denning connected to the music, and he completed an astonishing 100 songs from late April to December 2020. "I wrote Monday through Friday, on Zoom at first and then we started writing again in person a little bit," he says. "I just saw it as an opportunity. I'll never get this time back, so I might as well spend it being creative in one way or the other."

For the new EP, Denning says he winnowed the list of new songs down to about 20 to pick from, and ultimately, four made the cut for the six-track project. They brim with the countrified imagery that colors Denning's life — dirt roads, dive bars, pickup trucks and fishing — with one droll kiss-off song (current radio single, "ABBY") thrown in for good measure.

It wasn't hard, says Denning, to keep the lyrics down to earth. "It's just who I am and the things I love," he says. "I think every artist should do that. If they don't, then they're not being authentic to themselves and to everybody. So yeah, it was easy to sing about fishing and drinking beer and all that stuff."

But Denning also has dug under the surface of the familiar themes, particularly with two cuts, "I Went Fishin'" and "Grew Up with a Truck."

"Fishin'" is actually Denning's personal revelation that his favorite pastime really isn't all about the fish. "The place that I find a little bit of solace is on the boat, and I leaned on that super-hard through last year," he says. "I love catching fish, but I think the reason that I go back to it so much is where it takes me mentally. Whatever your fishing is, that's really what this song is about. It's the things that take you away from the reality and heals you without you really knowing it."

For the first verse, he drew on the loss of his childhood dog, a black lab-chow mix named Ellen that died when he was in his early 20s. "She lived a good long life, but it's never fun to say goodbye to a dog even when they're older," he says. "I just thought about the moment she got to the point that all dogs get to, and you just sit there and go, I'm not going to be over this tomorrow or in the next week, and you just don't know what to do. For me, it was leaning on fishing."

Denning was commissioned earlier this year to write "Grew Up with a Truck" for the Charles Schwab Challenge PGA tournament, which awarded a custom-rebuilt 1946 Dodge Power Wagon to the winner.

"They said, 'We would love for you to write a truck song for this, and I was like, 'Well, lucky for you I love writing songs about trucks!'" says Denning, who later decided the song was a good fit for the EP.

With a lengthy deadline, he dared himself to write it without collaborators, and he says he warmed to the challenge. "I'm trying to write some more songs just by myself," he says. "If I get to a wall and need help, I'll go co-write it, but I think you really find some of your strengths when you spend time writing solo."

Of course, with "Truck" he had lots of inspiration to draw from — his granddaddy's 1987 Toyota 4Runner that Denning, at age 13, first drove on a back road; his father's two Ford F-150s; and then his first truck, a Chevy Silverado.

"It was a 5.3 V8 Z71 four-wheel-drive leveled down on 33s," he recalls, flashing his automotive-glossary chops. "It was perfect."

And the color? "Georgia Bulldog red!"

Denning says he's been a committed Chevy man ever since, but "I could potentially go Toyota Tundra next time, which I know might be a little country-boy sacrilegious, but hey, they go forever, and they're the fishing truck, that's for sure."

Denning's time on the road these days is mostly on a bus, supporting the Brothers Osborne tour. Post-quarantine, he says, he's finding a lot to appreciate in ways he didn't before.

"I'm just so grateful," he says. "It's like a totally different perspective. I try to take every opportunity now to go do things on the road, versus maybe there were days I woke up and just sat on the bus and did nothing. I remember the reason I love to do it is because I get to travel and do things."

So far that's meant, among other activities, noshing on a lobster roll in Portland, Maine, touring Boston's Fenway Park and having his face painted like a tiger at the Toledo, Ohio, zoo.

On stage, Denning reports, he's also been feeling a different vibe. "The number one thing that is just tangible is less people watching through their phones and filming," he says. "They're really living in the moment. I think you can just see people who missed it so much. What's cool is everybody on stage missed it, too, so where there used to be a little bit of a wall between the audience and us, it feels more like a celebration of returning to this thing that we love. It's been really amazing to experience that with people and just feel like we're right there together. It's almost like we're not even on the stage."

When he's not touring, Denning says he finds he's making more time for what he loves. "I'm trying to have those moments where I go, you know what? I'm home for two or three days. If I don't feel like writing, I'm learning to tell myself, then just don't."

Travis Denning Taps a 'Redneck Genius' to Get Help for His New Love Song — to Beer!

That freedom is allowing him to work on his new house, located near a reservoir east of Nashville, and he points out, "just nine minutes from the boat ramp." Also, three months ago, he and girlfriend Madison Montgomery adopted a Great Pyrenees mix, named Ranger, that's now 6 months old.

"Madison was like, 'Hey, I really want to get a dog,'" Denning says, "and I was like, 'Well, I just don't think it's the right time to get a dog.'" He flashes a playful grin. "So we compromised and got a dog."

Denning describes Ranger as "a good boy, very smart, very respectful," but so far possessing a delicate equilibrium. His motion sickness will keep him off the tour bus, and "I wanted him to be a boat dog," he says, "and it ain't looking too good for that."

Denning and Montgomery, the daughter of 1990s hitmaker John Michael Montgomery, have been a couple for two-and-a-half years, and the dog was definitely a "next step" decision. "I think all of my previous relationships added together are only about a year and 11 months," says Denning, "so this is going really well."

Though he's still not ready to use what he calls the "E" word (hint: it generally follows a proposal), he assures that they have "definitely discussed those things and all that."

So she's a keeper? "For sure," he says, the grin reappearing. "A hundred percent."

Denning's decisiveness lessens quickly on yet another subject: haircuts. Though he never stopped shaving during quarantine, Denning did let his hair go to a feral state (a country mini-trend that Dierks Bentley and Riley Green, among others, have also gotten behind), and it's now covering the back of his neck.

"Yeah, I'm at a crossroads here," he says. "I don't know what I'm gonna do. If I can make it to Thanksgiving, I might cut it after Thanksgiving."

Montgomery approves of the look, and friends have also urged him to keep it, "so I don't know what the answer is," he says. "I'm gonna keep going with the flow. That's what I've been doing for the past 28 years, metaphorically — and hair-wise." 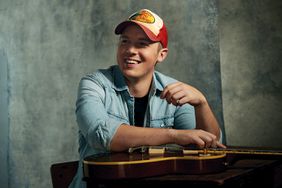 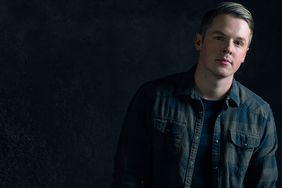 Travis Denning Taps a 'Redneck Genius' to Get Help for His New Love Song — to Beer!